The Non-Steroid Reasons To NOT Forgive Lance

In this day in age it has become apparent that it’s not the use of performance enhancing drugs that angers us so much, it’s those who did it and then deny it.

Jason Giambi was caught taking steroids, and apologized at a spring training press conference in 2005. He did not really admit, nor clarify what he was apologizing for, yet he apologized. So America forgave him and he was awarded with the 2005 MLB Comeback Player of the Year. Coming back from what exactly we will never know. I guess coming back from being a gorilla with a baseball bat, and then having to play the game he loved as a normal human being, and not someone twice the size of a normal human being.

The evidence shows that Roger Clemens and Barry Bonds took performance-enhancing drugs, yet they deny it or only admit to taking it unknowingly and America vilifies them.

The topic of performance enhancing drugs is still a very hot button issue in Sports most recently with that abomination of a Hall of Fame voting last week.  My stance on performance-enhancing drugs in Sports is simple and well documented, but for those of you who don’t know, I think punishments are all just hindsight police work.  Steroids saved baseball. Period. Deal with it. Move on and just accept the era. But I can feel myself getting on a tangent about steroids and baseball and that is not the point of today.  Today is about Oprah’s guest, Lance Armstrong. 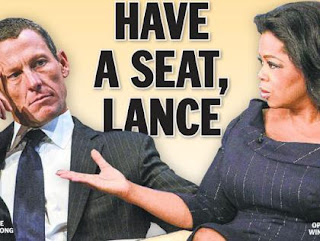 When he comes clean and tears up and becomes this “sympathetic” figure, the gut reaction of America will be to forgive him.  In my opinion, everything that Lance has done for the battle against cancer gives him a pass in my eyes on the whole Performance-Enhancing Drug issue.  HOWEVA, his personality, his decisions, his arrogance, and his lack of regard for other human beings are what we cannot overlook today.

Lance Armstrong took performance-enhancing drugs in a “sport” where 144.8% of its participants are dirty.  Seriously, cycling is dirtier than Quentin Tarantino’s sexual fetishes.  You show me a clean professional cycler and I will show you Sasquatch humping a unicorn while the Loch Ness Monster films it.

Lance Armstrong is a remarkable athlete who overcame some pretty significant odds to even live, let alone win 7 Tour De France competitions.  Yes, he was aided by performance enhancing drugs, but so were every single one of his opponents and therefore you have an even playing field where the cream of the crop rises to the top. (MUCH LIKE BASEBALL IN THE 90’S WHERE ATLEAST 80% OF THE LEAGUE WAS ROIDED OUT LIKE AN ARNOLD SCHWARZANEGGER FAN CONVENTION!)

As a cycler, Lance Armstrong is a champion. As a human being, he is a douche bag.
So today when he sits down with the Big O (no not you, Oscar Robertson), and before she gives everyone in her audience a free Schwinn,  do not feel sorry for this jerk, and do not sympathize with this prick.  You can come clean for taking steroids and doping your blood, but you cannot revamp yourself as an arrogant and self-revering piece of post-Chipotle (that’s poop for you layman’s).
Loyalty (n.). Loy-al-ty. The quality or state of having unswerving allegiance.
If there was such a thing as “The Loyal Bone”, the only way Lance Armstrong would have one in his body is if he injected it into himself, which he is quite accustomed to doing.
Lance’s first wife, Kristin, stood by him while he battled cancer which as HORRIBLE as it was for Lance, was very challenging for Kristin as well.  Kristin fought the impossible fight with Lance, and then essentially raised his kids while he peddled around the French countryside for months on end, not to mention the yearly training that goes with the Tour de France.  Then around 2003 Lance decides that he’s had enough, and divorces his wife and shacks up with Sheryl Crow.  Thanks for the memories, Kristin, it’s been real. But a douche has got to do what a douche has to do.
Clearly, their marriage is none of my business and I don’t know all the facts of what fell apart, but what I do know, is that when a woman stands beside you in the fight of your life, you don’t leave her the first time a celeb gets a whiff of your nuts, or nut in Lance’s case.
Lance and Sheryl Crow were together for close to two years, got engaged, and then Lance broke it off three months into the engagement.  Coincidentally, the break-up happened right around the same time Sheryl Crow was diagnosed with breast cancer.  Mr. Livestrong just didn’t have the balls ball to stick it out and stand beside the woman he “loved” enough to ask her to marry him.  He also cited that she was pressuring him to have kids, which he claimed he did not want. But then had one with the next women he shacked up with, Anna Hansen.
The only thing bigger than Oprah’s bank account is Lance Armstrong’s ego.  Lance’s ego is so big, that if it were on the menu at Sizzler, even Albert Haynesworth would have to walk away from the table without finishing it. Hell, the guy even thought he could run for governor of Texas, and even worse, he expected to win!
And finally there are the threats he levied upon anyone who snitched on him.  Tyler Hamilton, Betsy Andreu, and Greg LeMond are a few that were on Lance’s list. Good people do not threaten others and take a public crusade against them. Good people do not threaten teammates who went through the tough times and grinded out wins together. And good people certainly do not threaten their teammate's wives.
At the end of the day, Lance Armstrong is a world class athlete who raised more money than anyone could dream of to fight cancer.  For that he needs to be applauded.  But, when you are an arrogant, and cocky narcissist who only looks out for number one, then you must be brought down.  Its OK to forgive the guy for taking drugs when his entire profession was doing the same thing, but when he cries on Oprah’s couch do not forget who he is as a person.
So Lance, peddle hard and peddle fast, because we all just want you to peddle off into oblivion and never be heard from again.
Posted by Battle of the Beltway at 5:18 PM