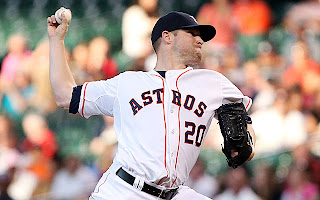 Posted by Battle of the Beltway at 4:57 PM No comments:

After starting off the second half of the season winning 5 in a row, the Orioles have since dropped five of seven to the Royals and Red Sox.  Doing what the 2013 Orioles are not accustomed to, losing both series.

Chris Davis is scuffling at the plate, starting the fabricated “Post Home Run Derby” excuses. The back end of the rotation (Feldman and Hammel) are floundering and atrocious, respectively.  Not to mention the Red Sox and Tampa Bay Rays lose as often as Jennifer Aniston keeps a guy around.

But with all of this said, we need to listen to the wise words of Will Ferrell. This team is too talented, and there are too many reasons to continue to believe in the 2013 Baltimore Orioles to go and press the panic button now.


The O’s find themselves at 58-48, 5 games back of the Red Sox in 1st Place, and 4.5 back of the Tampa Bay Rays in 2nd place. It is never too early to start looking at the Wild Card Race, in which the Orioles are one game ahead of the Cleveland Indians for the final Wild Card Spot. Going on the road for a one game playoff is A position the O’s are very familiar with.


While it’s no secret Crush Davis is enduring a strikeout heavy slump, he will breakout of it and prove to the naysayers that the 1st half was not a fluke.  We all know what we are getting from the rest of the Orioles lineup, which oozes more unappreciated talent than the cast of Freak & Geeks.  Wieters is coming around, Jones is showing a slightly more disciplined approach, and Hardy, Markakis, McClouth, and Manny Mucho just continue to plug away on fantastic seasons.  The offensive will be a catalyst for the Orioles down the stretch, but the big burden falls upon the strength of the pitching staff.


While Hammel has been ineffective most of the season, and many of us are still scratching our heads over the acquisition of Scott Feldman, the rest of the rotation has been excellent.
Miguel Gonzalez is the king of the quiet quality start.  Without fanfare or much attention, Miggy Gonzo’s workman like style continues to rack up quality start after quality start.   Before his recent rough outing vs. the Royals, Gonzo had tallied 8 quality starts in a row and now has a 8-4 record with a 3.69 ERA.  Since his call up last year, Gonzo is 17-8 with a 3.47 ERA and 24 quality starts (in 33 games started!).  Consistency doesn’t even begin to describe Gonzo’s contribution to the ballclub.

Wei-Yin Chen continues to be effective as well, as he navigates his way through 6-7 innings every time out.  He tends to run out of gas in or after the 7th, but he puts the team in position to win, more times than not.  He too has become a stabilizing force in the rotation.

Now if you don’t mind, it’s time for me to gush over Chris Tillman. For the nine of you who listened to our Season Preview Podcast back in March, you will remember that I predicted 18 wins out of Chris Tillman. I was laughed at by all nine of you, but with a sparkling 13-3 record, Tilly is emerging as a potential ace.  Tillman is able to pitch consistently in the low to mid 90’s with his power curveball that leaves batters off balance.  His ability to consistently pound the lower quadrant of the strike zone leaves hitters frustrated and backwards at the plate.

His two major problems when he was coming up through the ranks were diminished velocity and a lack of command of his pitches.  The velo appears to be back where it needs to, and Tillman’s strikeout to walk ratio is a cool 104:47.  Sabrematricians will tell you that wins are an erroneous stat to a starting pitcher; sabremetricians will also tell you that a woman’s breast feels like a bag of sand.

Receiving a win is not all about the starting pitcher of course, the team needs to produce enough runs, and the bullpen needs to preserve the win as well. But a pitcher must be effective and must pitch well enough to allow his team to win, cut to a confused looking Jason Hammel.

Tillman, Gonzalez, and Chen are consistent and will continue to keep the O’s in the race, and truthfully I still think Feldman will be an effective option, he’s just not that fun to watch.  He works slow, and his stuff is very vanilla, leaving you ready for the big inning the 2nd time through the opponent’s lineup.  However, if he can just give the O’s 6 solid innings keeping them in the game, then he has done his job.

The Orioles have already made two trades this month, first acquiring Scott Feldman, and then picking up Francisco “K-Rod” Rodriguez last week. Can I get a quick sidebar on K-Rod? Please and thank you…

SIDEBAR:  I LOVE THIS MOVE. Not just for the important role the future Hall of Fame Closer will play for the overtaxed bullpen, but what this trade signifies to the locker room and to the fan base.  Trading the organizations number 4 overall prospect (Nick Delmonico, 3B) for a rental relief pitcher shows everyone that Dan “The Duke” Duquette is serious about this squad.  This is a “win-now” trade and lets the fan base know that this team has World Series aspirations, and the front office will do whatever it takes to get there. Of course it doesn't hurt that K-Rod has 304 career saves in cluding a 10/10 statline this year and a stingy, almost penny-pinching ERA of 1.04.  Again, I FREAKING LOVE THIS MOVE.

But back to what I was saying about the Orioles making trades.  Even though the amount of trade chips in the Orioles farm system is as stocked as a mormon’s liquor cabinet, the Orioles are still listed as major players for the likes of Jake Peavy, Carlos Quentin, and Michael Young. While I would welcome every single one of these players with open arms, I do not want to see the name Kevin Gausman involved in the trade talks.  The bottom line is, the Orioles will be players in the July Trade Deadline, and you can expect them to remain active in August with the waiver trades.  This team is strong, but it can only be added to and The Duke will continue to look to add to the talented roster.

There is no denying this team is in a funk right now. Yet there is also no denying that they have got the talent, the leadership, and the winning attitude to get through this and reel off the necessary wins.  If you don’t believe in the Birds, the exit for the bandwagon is on your left.  Buck Showalter will be there to push you off swiftly with his orange fungo bat. 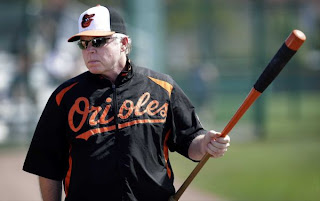 Posted by Battle of the Beltway at 10:49 AM No comments:

Ben has written an article about Chris Davis, Manny Machado, and Adam Jones for MLBReports.com

This is hopefully the first of many articles Ben will be tackling as the Orioles Correspondent for MLBReports.

Check it out HERE! 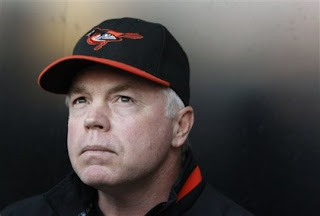 Posted by Battle of the Beltway at 10:32 AM No comments: