Natsfest was this past weekend, and suffice to say the excitement level for this franchise is high to quite high.   In fact, there is more excitement surrounding this team than there is hair surrounding Jayson Werth’s face.

It’s been an offseason of additions, with the acquisitions of center fielder Denard “The Nard Dogg” Span, starting pitcher Dan Haren, and closer Rafael Soriano.  These are the headline grabbing additions, but one major Nats announcement snuck under the radar.  We are not quite sure how it snuck under radar, considering the girth associated with the addition.  Of course we are talking about the newest President to throw his hat in the ring, William Howard Taft aka "Air Force Ton." 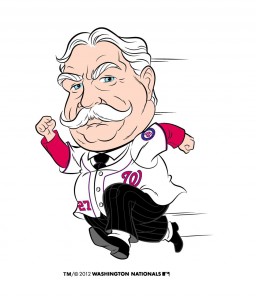 While Taft is not exactly the model of fitness, in fact he is a more likely candidate for The Biggest Loser than he is for the Presidents Race.  However, that did not stop the Nationals Marketing Squad from signing Taft to a lucrative contract.  Some of you may be scratching your head on how this round, mound, of progressively conservative sound etched his way into the race.  Fear not loyal readers for we have put together an in-depth and extensive scouting report on our new large and in charge racer.

Notable Health Issues:
-Morbidly Obese
-Ate high caloric meals leading to extreme cases of burping and farting.*
-Got stuck in the White House Tub and had to be removed by his aides who greased him and the tub with butter.* No joke, look it up.

Connections to Baseball:
Due to the obvious question marks surrounding Taft’s health and fitness (cut to Michelle Obama nodding with crossed arms), he seems like an odd choice.  However, Taft has some deeper connections to the diamond then us casual folk may be aware of.

On April 14, 1910, the Big Fella threw out the first pitch before a Senators' game, making him the first president to throw out the first pitch.  Just like the bacon grease near Taft’s ribs, it stuck as every President since has performed this duty.
As we have alluded to, Taft is one hefty mountain of a man, and cramming himself into two seats for 9 innings can be an arduous task.  Therefore, in the 7th inning of the same game in 1910, President Taft stood up, cracked his back, and stretched himself out a bit.  Taft then got up and left his seat to take a walkabout.  The stadium figured their commander-in-chief was leaving and therefore everyone stood up to say goodbye. Thus creating the tradition we all know as the Seventh Inning Stretch.

Strengths:
His large frame can lead to a downhill running style, that once he gains momentum, look out! Think Thud-Butt from Hook.

Taft has a Michael Phelpsian caloric intake which provides a serious source of fuel for race day. His inordinate amount of flatulence also propels him to a faster rate than the wispy George Washington or the wirey Abraham Lincoln.

Weaknesses:
Seriously? Dude is a fat ass.  Taft is what we like to call in the baseball world a “Bad Body.” His weight issues lead to him having a tough time getting to top speed.  He has had difficulties finishing races due to his aforementioned weight issues leading to necessary stops.  Finishing out races can be a real struggle for America’s most powerful glutton.

Interesting Storyline to Look For:
Roosevelt and Taft do not like each other.  They were once friends and colleagues and than that friendship went further South than an old Jewish couple from New York who just bought a house in Del Boca Vista!

Teddy was President for two terms and then turned over the reins to fellow Republican, Taft.  When Teddy left the Oval Office, he felt that he had left it in good hands with his mustachioed brethren.  Teddy was a progressive reformer and many in Congress expected Taft to carry on this legacy and keep the Country moving in a forward direction.  Well the only thing moving forward during the Taft years was his belt buckle as it struggled to maintain his Presidential gut. Taft’s policies became so conservative, that Teddy came out of retirement to run against Taft for the Republican Nomination in the Election of 1912.  Teddy formed the Bull Moose Party and the Republican Party became split between Taft and Teddy, and this split helped elect Democrat Woodrow Wilson in 1912.  The tension between Taft and Teddy can be cut with a butter knife; probably the same one that helped spread butter on the President during Tubgate.  Look for this score to be settled on the warning track of Nationals Park, come race day.

If the guy struggled to get out of a bath tub, how can he possibly expect to beat the fleet footed Washington, the honestly Usain-Boltaciously quick Abraham Lincoln, or the author of the Virginia Statute of Religious Speedom, Thomas Jefferson? Or how about Taft’s personal rival the “Swinging Stick of the Presidents Race” Teddy Roosevelt? Seriously folks, does this guy look athletic?

Posted by Battle of the Beltway at 2:58 PM