While the Baltimore Orioles’ offseason has been relatively quiet, the franchise made some noise last night. The ripple made by the Birds may have been quieter than a fart in a Jacuzzi, but it is news worthy nonetheless.

Last night Major League Baseball announced it’s top 100 prospects in baseball and Orioles right-handed pitchers Dylan Bundy and Kevin Gausman found themselves on the list. Bundy came in as the number 2 prospect in all of baseball, and Gausman rolled in at number 37. They were the only Orioles in the list, which is a little disappointing, but then again the farm system isn’t exactly bountiful.

This will be a quick post, mostly to inform you of the two arms in our system that are on the fast track to the big leagues; in fact both could conceivably be pitching in Camden Yards at some point this summer.  There will be no extensive breakdowns or scouting reports on either pitcher in this post, for I am reserving my baseball nerdiness for the upcoming season.

Dylan Bundy is ONLY 20 years old and made his Major League debut last season, after being drafted 4th overall in 2011.  He diced up the Minor Leagues last year in his first professional season.  Watching minor league hitters bat off Bundy is like Usain Bolt’s kids trying to run away from a spanking when they get in trouble.

Kevin Gausman was the 4th overall pick in last year’s draft and pitched in Short Season Aberdeen, and made a brief appearance in Single A with the Frederick Keys.  Gausman hides the ball very well.  Detecting which pitch is coming from Gausman is like detecting deer antler extract in someone’s blood, right Ray Lewis? 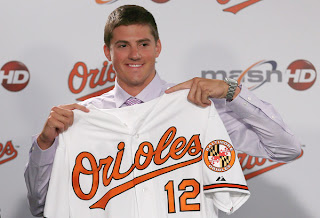 Pitchers and catchers report in two short weeks, and for the first time in a very long time, both Birdland and Natstown have a lot to look forward to! We here at the Battle of the Beltway are not exactly sure what to do with ourselves, but you can expect limitless optimism, unabashed homerism, and predictions that even the man on the moon thinks are lofty. Suffering through the tough seasons year in and year out, we have every friggin right to feel this way, so either get on board and get off at the next exit!
Posted by Battle of the Beltway at 1:35 PM