When we decided to go ahead and unleash this blog on the DMV, it was meant as a place to discuss our undying love for hometown sports.  With this unbroken devotion there was much disappointment and frustration, but every now and then being a fan of the local sports teams in this area can be very rewarding.  THIS IS THAT TIME.

Here at the Battle of the Beltway, we ruminate on the Redskins and Wizards, but at the heart of this blog are the Orioles and Nationals.  Ben’s belief in the Orioles and Tyler’s passion for the Nats are the pulse of this blog and our in your face homerism and unrelenting optimism can seem laughable at times, but we’ve got one question for y’all…WHOSE LAUGHING NOW!?!?

Let’s go to our Birdland Correspondent Ben for more reaction:

Last night when the Los Angeles Angels of Anaheim of Orange Couty of California of the United States  of North America of Planet Earth lost to the Texas Rangers, the Orioles officially punched their ticket to the postseason. That’s right folks, for the first time since 1997, the Baltimore Orioles are heading to the playoffs.  I’m not ashamed to admit that when the Rangers won last night I shed a few tears (8 to be exact, always gotta honor Cal).  I was overcome with emotion that has been pent up since 1997.   I never wavered from my Birds, not during the firesale of 2000, not when Albert Belle’s hip became less sturdy than France’s defense forces, not when the Nationals came to D.C., and not when the O’s gave up 30 runs in one game, and certainly not when Peter Angelos celebrated his 83rd birthday.

I grew up living and dying with the Orange and Black and that never changed. This season has been special for so many reasons. It’s hard to put into words the excitement and emotion us Orioles fans are feeling this morning. Validation? Perhaps. But whatever, it is, it must be tabled because there is still work to do.  The Orioles are currently tied with the Yankees for first place in the A.L. East.  The O’s head to Tampa for a 3 game set against one of the hottest teams in the league.  The Yankees are home versus the Red Sox - who we witnessed first hand this weekend - have absolutely mailed it in.  They don’t listen to their manager and their lineup is made up of a bunch of Triple-A players and the ghost of Dustin Pedroia.  Everything favors the Yankees this week, but with the way this season has gone how can you count out the Birds?

The A.L. East crown would be icing on the cake, but either way the Birds will be playing a meaningful game(s) in October and it just feels so damn good to say that.  Go crazy Birdland, this is what it’s all about. 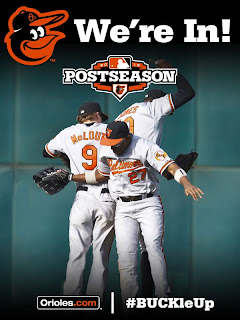 Now let’s head to Natstown for a news bulletin from Tyler:

The Nats clinched their playoff spot last week, and their magic number for winning the N.L. East is now 1.  Just win baby, just win!  When they clinched a playoff berth I did 37 fist pumps, and I’m pleased to say my elbow felt fine.  I kept it close to the body, relaxed the fist, used some legs as well.

What else can you say about these Nats? Everyone wanted to write them off when the Riz infamously shutdown Strasburg, but that is why they built this rotation as strong as they did.  Jordan Zimmermann, Edwin Jackson, GIO(!), and Detwiler have really picked it up.

Hey remember in April and May when the Nats offense scored less than a Japanese exchange student? Yea me neither! Anybody in this lineup can take you deep at any time, and timely hits are a regular occurrence for this team.  Harper is a budding superstar, Werth is playing up to his end of the contract, and Desmond is a monster.  Big Mike has discovered his EPIC powerstroke and is busy hitting balls into the Nats bullpen.  In Philly, that's 430+, to the opposite field.

I’ve heard those of you saying the Braves are hot, and the Nats appear to be limping in to the playoffs. To you I say….TAKE A LAP! Just win one of three vs. the Phillies this week or if the Braves lost JUST one game, then the N.L. East crown is ours! 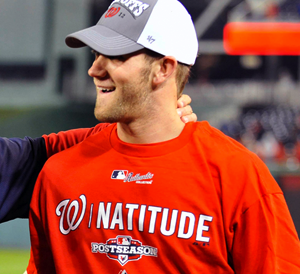 Beltway Baseball is real folks and it ain’t going anywhere!  Could you imagine two division winners in a 40 mile span!?!?!  How sick would a Beltway World Series be? There is still clearly A LOT of work to be done over the next three days for the O’s and the Nats, but they are both playoff bound. In the word of Tug McGraw…YOU GOTTA BELIEVE!  Also, both teams have arrived a couple of years ahead of schedule, enjoy it now, looks like this success thing could be around for a while.....

Our homerism told us this day would come and we believed it would be sooner rather than later.  Our overly aggressive homerism and optimism are what has gotten us through some pretty lean years, but it’s all been worth it.  The euphoria we have felt this summer (and now into the fall!) has been worth every nano-second.