If you are lucky enough to attend today’s game or any of the Nationals playoff games, it is your responsibility to conduct yourselves appropriately.  And by appropriately, we mean going absolutely berserk and losing yourself in the ballgame!

For whatever reason, our fan base has been hit with the label of not being the most educated, or most excitable.  These claims are probably being made by condescending New Yorkers and Bostonians, but in the slimmest glimmer of this being the tiniest bit true, we have decided to give you a few guidelines on what not to do at a playoff baseball game (or any baseball game for that matter), just to be safe.

First off, we’ve got to stop jumping out of our seats every time a Nationals batter lofts a fly ball into the outfield.  Just because it is a flyball, does not mean it has a chance to be a home run. Who are we, Dodgers fans? Seriously, some of you have worse reads on a flyball than Albert Belle.   A key things to look for to make sure you don't "clown out" everytime there is a flyball.
-Listen for the sound of the ball of the bat.  If it's a real firm whack, it's got a chance.
-Watch the batter's reaction and body language.  If he pimps it or starts strutting, he's probably gotten a good hold of it.
-Watch the overall trajectory of the ball. This is usually a good indicator whether or not the ball has the distance.

We love heckling the pitcher just as much as Henry Rowengartner, but booing said pitcher every time he throws a pick off over to 1st Base is not a good look.  You’re essentially saying, “BOOO! STOP PLAYING SMART BASEBALL!”  Pickoffs may seem like a stall tactic to some, and they may bore others, but pickoffs are part of the game.  How many times did you hear the Cardinals fans booing when a Nats picture picked over? Probably the same amount of times Jan Vesely hits 2 consecutive free throws.  Tell the pitcher his mother is a one-eyed whore, but for the love of God, no more booing on pickoffs.

If you are over the age of 12, 11 years old, DO NOT BRING A GLOVE TO THE GAME!  I don’t care if you are sitting a row behind the dugout and need it for protection; use your bare hands or your inner-Keanu and Matrix out of the way of the ball.  No grown man should have a glove at a baseball game, period.

While Steve Bartman did not have a glove on his hand, he may as well have to go with those headphones and that turtleneck.  This guideline is directed towards the people lucky enough to be sitting down the left field or right field lines.  If a foul ball is hit down the line when the Nationals are in the field, DO NOT interfere with Big Mike Morse or Jayson Werth.  Allow them the best opportunity to make the play and get outs, cut to Moises Alou nodding his head.  If you are sitting in the front row you need to turn into the walk-on at the end of the bench during March Madness, and hold everybody back. 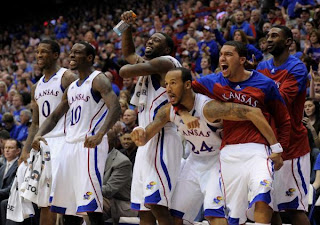 And finally, I think I speak for most red blooded Americans when I say STOP DOING THE WAVE. A baseball stadium is not the place for a wave, especially when your team is out in the field.  It is distracting and it makes it harder for the defense to read the ball off the bat when the crowd is ebbing and flowing all over each other.  If Terrance and the rest of the Natitude Crew are telling you to stand up at the count of 3, look him dead in the eye and tell him that his dance moves freak everyone out and it’s time for him to start looking for a new day job.  The Wave is a sign of boredom as well as a complete and utter lack of feel at a baseball game.  We can stop this notion that Nats fans are still new to this whole “baseball” thing, by simply eliminating the Wave.

When Edwin Jackson gets two strikes on a batter, get the hell out of your seats and start cheering and making noise.  There are few sports moments cooler than when a home team’s pitcher has two strikes on a batter (especially with two outs) and the whole stadium rises up as one.  It’ll give anyone goosebumps, in fact it even makes the hairs on the back of James Carville’s neck stand up.

Get loud, make noise, let the whole eastern seaboard here us today!  Wave those red towels until you feel like you’ve torn your rotator cuff.  And when that happens, wave some more.  Strasburg may have had an innings limit, but we sure as hell don’t!

Natstown is full of passionate baseball fans who have been waiting for today.  Our savvy fan base has gotten a bad rap, probably from doing a few too many Waves.  But we all know what this fan base and this team are capable of.  Keep these friendly guidelines in mind today during our franchise’s BIGGEST GAME.

Go crazy, get wild, and leave your glove at home.
Posted by Battle of the Beltway at 9:05 AM