With the Super Bowl still over a week away, instead of writing meaningless and unimportant posts about the Senior Bowl or the Pro Bowl we have decided to swear off sports for the week. Our Week of Non-Sports Related Content continues with another Top Ten List.

4) The Girl With The White Wig (Let us know if Stieg Larsson steals this title!)
ORDER! ORDER! Please rise…the Honorable Judge Uppityskank is now presiding over the party.  This girl either sits on a couch or stands in a corner of the room armed with an artillery of scowls and disgusted looks as she judges (hence the “White Wig”) every other girl there.  She critiques their outfits, their hair, their shoes, EVERYTHING.  This girl does not move from her perch and does not talk to anyone unless she is joined by a like-minded girl/her partner-in-bitchdom.  But in most cases this girl ends up sitting/standing by herself because she literally hates EVERY other girl, and no one wants to be around her and her negativity. This girl is one of the absolute worst girls at a party.  No seriously, nicer people gather at Klan rallies.


3) Let’s Do Shots of Shitty Vodka All Night Girl
This girl is Pinnacle of annoying. See what we did there? If you didn’t catch that joke, then you are lucky.  But if you understood that joke then you are probably this girl. Every party has this Popov Promoter, EVERY PARTY!!!  She walks in with a purse the size of a duffle bag; she’s either toting a midget in that burlap or it’s a handle of the finest vodka that only plastic has the structural integrity to hold.  She whips that handle out like it’s some undiscovered treasure she had to brave the Temple of Doom to unearth it.  When really she just had to look at the bottom shelf and grab whatever she could get her mitts on.  As she pulls the bottle of motor oil she calls Vodka out -clearly hammered- she then drops the shitty bottle of Rikolof and laughs like a boy discovering his first boner.  Not to mention this chick is always the loudest thing at the party, drowning out all conversations, music and drinking games. For the first hour of the party she’s trying to organize shots that NEVER actually happen because she gets distracted by shiny things.  She never gets close to finishing her Ukraine Urine, until you see her at the next party with that same friggin' bottle of liquor that sucked in college. Maybe it’s time to stop bringing Swedish Fish flavored vodka to every party you go to sweetheart.
2) Ms. Mutombo (The Cock Block)
This chick is the most well known (and deservedly so), and worst received girl at any party.  Funny correlation, isn’t it? Rarely are these girls physically attractive, basically in any way, but make no mistake: they have no problem making their presence felt when you’re trying to HAVE A CONVERSATION with another girl.  It’s so funny, because as a dude, you can SEE the nutty wheels turning in this girl’s heads.
Picture this: A Guy is talking to a girl when Ms. Mutombo unleashes her assault:
“OH MY GOD, she is NOT talking to him! Wait, what if she likes him? What if she gets naked on the spot and starts having sex with him? I can’t let that happen, I’m stepping in.”
The next thing you know, you’re innocently listening to your new friend go on about her dog, and her ginormous friend walks in to kill any good vibes you had going your way. Consider your cock, blocked. 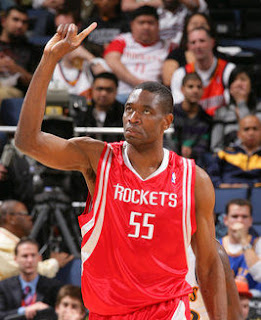 1) The Smurfette (The Cock Tease)
Arguably the worst girl in the game, today.   Eerily similar to the drunk slut because she starts out nice, but gets a little scary.  She secures your attention one harmless touch or glance at a time. Next thing you know you’re smitten.  Anyways, for whatever reason as soon as you talk to this girl, she makes you feel like you need to tell your boys, “dude, I think she’s in to me, I think I’m gonna take her down!”  To which your buddy, if he’s willing and able to mess with you says, “ GO FOR IT!!”  All the while he knows what kind of games this Venus Flytrap plays; in fact, chances are he’s fallen for them before too. Needless to say, after you’ve been working a strong game for 2 hours, she ups and leaves never to be seen again.  And there you are, just you and your Smurf hued balls…
Posted by Battle of the Beltway at 10:20 PM