Top Ten One Hit Wonders from the 90's

It is safe to assume that the majority of our readers grew up during one of the best decades, the 1990’s.  We had O.J., Monica and Bill, Michael Jordan at the peak of his powers, and of course Zack Morris and that mobile phone of his.  The 90’s music scene was an eclectic mesh of grunge rock, early techno inspired beats, a new brand of POP, and of course boy bands.  The major gift from the 90’s music scene was the absurd amount of one-hit-wonders.   It was almost as if musical artists sat down at a big convention and decided the 90’s would be a decade devoted to pumping out one major hit and then fading into oblivion.  It is truly impossible to narrow the list down to only 10 hits, so we decided to only include songs from the mid to late 90’s. I must apologize to the pioneers of one-hit-wonderdum in the early 90’s like Vanilla Ice, Right Said Fred, Sir Mix-A-Lot, and Tag Team.   These bands were the Amerigo Vespuccis, Christopher Columbuses, Lewises, AND Clarks in the decade of one and done fame.  These Jackie Robinsons paved the way for the epic greatness that would soon follow…
Before you read the list, we have to tell you that Sex and Candy by Marcy’s Playground will not be included on this list. While it certainly meets the criteria for being a top 10 one hit wonder, it is also the national anthem for Pedophiles and Sex Offenders.  Therefore there is no place for it on the list. End of Story.
10) New Radicals- You Get What You Give:
This song hit the ground running in 1998 and even though these guys looked like a bunch of massive weirdos in their music video, it certainly did not take away from what a big hit this song was. This song did more for malls in the 90’s than an Auntie Anne’s located next to an Orange Julius. This song got a little political towards the end and even took shots at the Hanson Brothers, but forgave them because the 90’s didn’t focus on the politics; right Bill Clinton? All you really need to know about this song is that Stephen Strasburg likes it.  According to the “bulletproof” Wikipedia, this song inspired Stephen Strasburg to become the pitcher he has become.  I don’t remember hearing any lyrics that said “Throw the ball hard, and you’ll get millions of bucks!” But if the Strasburglar likes this song, than that is good enough for the rest of the DMV.
9) Len- Steal My Sunshine:
First off, it sounds like Len smoked a carton and a half of Marlboros before recording this song. No seriously, this guy did more fore raspy voices in the 90's than Harvey Fierstein. Google Harvey later, and you'll see what we are talking about.  There really is not much to say about this song other than Len came out of nowhere and returned to the nowhere from whence he came after a few short months. Just watch the video and check out the dude with the muttenchops who sits onthe mo-ped next to Len. It's worth it, trust us.
8) Sister Hazel- All For You:
When you hear the opening chords to this song you recognize it instantly.  There really are no jokes to be made about this song, it was great in the 90’s and it is still great now.  It has morphed from one hit wonder on the radio in the 90’s, to now being a great song that cover bands turn to when they need to give their audience a boost.  There is nothing cooler than jamming with a cover band, hearing the opening chords to Sister Hazel then hearing the whole bar belt out: “Finally I figured out, but it took a long long time…”
7) Lou Bega- Mambo No. 5:
1, 2, 3, 4, 5, that’s how many months Lou Bega’s career survived.  Ahhh Mambo No. 5, such fond memories.  I think we can all agree that we thought this song was more annoying than Fran Drescher’s voice, but nothing broke down the barriers at a 7th grade dance like Lou Bega.  The only concern here is if Mambo No. 5 is the 5th mambo, what has Lou done with 1-4? Did he try and make a no. 6? Or maybe he is sitting on Mambo’s 1-4 and he is going to resurrect his career in 2012. If this happens, we should all tip our caps to the Mayans.
6) OMC- How Bizarre:
It is still very confusing how this song was such a big hit for such a long time in 1997, in fact you could say it is quite bizarre.  I mean the lead singer looked like he was auditioning for the lead role in the Latino Elvis Gay Porno flick, Viva Las VegASS.  The lyrics even hint at this guy’s interest in starring in some dude on dude flicks: “Everytime I look around, it’s in my face!” If you understand these lyrics and they make sense to you, please let us know.  The only redeeming quality of this song is the ascot the lead singer wears in the music video.  Nonetheless the song killed it in the 90’s and earned a place on the list. 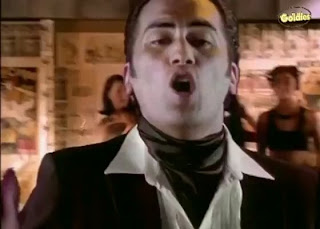 5) Eiffel 65- Blue:
Eiffel 65 came in at the end of the 90’s and slingshotted us into the new millennium.  Maybe it was the beats or maybe it was the goofy little blue dudes in the music video, but this song kicks butt.  Reading the “Writing and Inspiration” section of this song on Wikipedia makes it sound like a song 3 kindergartners came up with, but that is besides the point.  We think this song is about a guy who got so many OTPHJ’s that not only were his balls blue, but his whole world became blue.
Blue his balls, and blue were his chances. With his swollen nuts and his failed romances. But now he ain’t got nobody to help him…to help him…
4) Baha Men- Who Let the Dogs Out:
This song transcended ages. Kids loved it, teenagers loved it, adults loved it, and even old people loved it.  This song was catchy, upbeat, and was a bonafide hit.  The song was heard the most at sporting events because it fired up the crowd and got the stadium rocking.  What is truly impressive about this song is the fact that it is about ugly women at bars and it was still able to accomplish everything we just listed above.  Don’t believe us? Here are some lyrics:
“Well, the party was nice, the party was pumpin'/Yippie yi yo/And everybody havin' a ball/Yippie yi yo/I tell the fellas start the name callin'/Yippie yi yo/And the girls respond to the call…”
Still not convinced? How does this taste?
“I see de dance people had a ball/'Coz she really want to skip town/Get back, Gruffy, get back, Scruffy/Get back you flea infested mongrel…”
We think the joke may have been on us America. Well played Trinidad and Tobago. You may have won this one, but we will always have the opening round in the Junior Olympics from D2: The Mighty Ducks Are Back.
3) Los Del Rio- Macarena:
Dammit this song was catchy. 1995 and 1996 are still sore from the assault Macarena unleashed on us all. This song was played everywhere whether it was a sporting event, a bar mitzvah, a PTA meeting, or a Klan rally. And EVERYONE knew the moves, in fact everyone still knows the moves.  The old saying “its just like riding a bike” has now been changed to “it’s just like dancing the Macarena.” Any wedding DJ worth his salt still plays this song once a gig just to get everyone out on the dance floor.  This song makes you forget about your unpaid mortgage, your crappy job, and your cheating boyfriend.  It brings your back to a simpler time; 1995, when steroids were rampant in baseball, American Gladiators wasn’t ruined yet by Hulk Hogan, and you left your Tamagatchi with your friend when you went on vacation. HEYYYYY MACARENA, AHHIY!
2) Hanson- MMMBop:
Ahhh the Hanson brothers. We barely knew ye.  This song was so catchy even Carlos Rogers couldn’t drop it.  This song is about friendship and how you need to hold on to these relationships because they could be gone in an MMMBop.  How does that not tug on your heartstrings? You should not be laughing, but grabbing for the tissues to dab your eyes.  These young boys entered our lives in 1997, and touched us all in so many ways, settle down Sandusky.  These three girly looking dudes have since become American heroes because there song has been used to make terrorists crack during interrogations.  Many terrorist secrets have been unveiled thanks to lyrics like, “Plant a seed, plant a flower, plant a rose/You can plant anyone of those/Keep planting to find out which one grows/It’s a secret no one knows.”
We are pretty sure breaking terrorists’ souls was not the Hanson brothers’ motivation by the song, but we’ve got a feeling it’s got to make the feel pretty good.  The Hanson brothers were wise beyond their years as evidenced by their lyrics from the song, “hold on the ones who really care/In the end they will be the only ones there.” The Hanson boys found this out all too soon on January 1, 1998 when there song was no longer big and they were no longer relevant. We heard their parents disowned them, but we could be wrong.  Nonetheless, this song was a massive hit and anyone in their 20’s right now will tell you what a great song that “MMMBop” was.
1) Chumbawumba- Tubthumping:
We’ll Be Singing. When We’re Winning! Chumbawumb had no idea how much singing they would be doing in 1997-1998.  The guys were #winning so much even Charlie Sheen is impressed. This song has to be the biggest hit of the mid to late 90’s.  They never even attempted to come out with a second song and were very secure with their status as one-hit-wonders.  We really aren’t sure what “tubthumping” is, but we are pretty sure it is not about a guy drawing a bath and then jerkin’ his gerkin. It’s a self-motivational song about getting hammered with your friends, probably drinking too much but fighting the spins and trying not to puke.  (Fighting the spins is like being the Buffalo Bills in a Super Bowl, you’re gonna lose every time) We can all relate to this, we’ve all had a few too many, mixed a few liquors we shouldn’t have, fallen down, and then pulled ourselves off the sticky bar floor only to regain our bar stool and rip another shot of Cuervo. Thank you Chumbawumba for your iconic hit and the undisputed number 1 one hit wonder of the 1990’s.
Posted by Battle of the Beltway at 12:14 PM