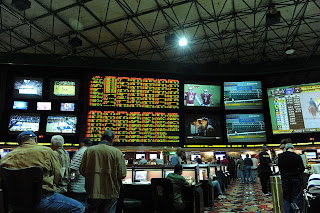 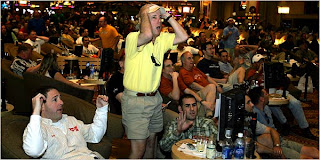 This section is for the degenerates who much like Pac Man Jones at a strip club, just can’t help themselves.  Prop bets deal with outcomes and results that do not directly impact the outcome of the game.  They are generally on certain players, team statistical totals, which team will score first, or how many pro bowlers Kim Kardashian has banged.
Prop Bets have differing payouts based on the probability of the outcomes.  For instance, the total points scored by the Falcons is set at 22.5 points.  We would generally jump at this line, except the odds for the over at set at -130 and the under is set at “even money.”  Translation: If you bet $5 on the over you would receive $3.85.  If you bet $5 on the under you would receive $5.  So when it comes to prop bets, you are looking for value or positive odds (+115, +150, etc.)
The Super Bowl is truly the best time to bet on Prop Bets because you can bet on everything including what color Gatorade will be dumped on the winning coach. However, we will treat these Wild Card Games as our tune up for the Super Bowl. So here are a few to wager on if you really like losing money:
Will There be a Defensive or Special Teams Touchdown in the Falcons Giants game?
Yes (+140)
Eli Manning is playing in this game folks. He is a solid playoff performer, but he has the tendency to throw interceptions.  All it takes is for the opportunistic Falcons defensive backs to jump one route and make a house call.  The value is here! The juice is certainly worth the squeeze.
Michael Turner Total Rushing Yards on FIRST ATTEMPT
Over 3.5 yards (even)
Even money is not always suggested when it comes to prop bets, but can you imagine how fun it would be to be on the edge of your seat for Turner’s first carry of the game?!?  Turner is a power runner and he averaged 4.5 yards per carry this year.
Will Roddy White score a Touchdown?
Yes (+120)
Will Tony Gonzalez score a Touchdown?
Yes (+140)
When Matt Ryan gets in the red zone he only looks for these two players.  Tony G had 7 touchdowns this year, 6 of which came in the Red Zone.
Roddy White had 8 touchdowns, 7 of which came in the Red Zone.  We are not saying both will definitely happen, but you have got to like the chances of at least one of these two players scoring when the Falcons are in the Red Zone.
And a few fun ones…
Tim Tebow will walk on water
Yes (+800)
Eli Manning will look confused during the game.
Over 4.5 times (+125)
Number of girls Big Ben will “chat with” if the Steelers win
Under 1.5 (+220)
Number of girls Big Ben will “chat with” if the Steelers lose
Over 1.5 (-400) Those are terrible odds, but he is likely to go on quite the bender if the Steelers lose.
We hope you find our ramblings useful, but keep in mind sports-gambling is as easy to predict as writing up the Orioles batting lineup right now.
GOOD LUCK AND HAPPY BETTING!
Yesterday’s Record 3-0
Season Record 3-0
Posted by Battle of the Beltway at 12:24 PM