Birdland Bulletin: The Night We Took Back The Yard 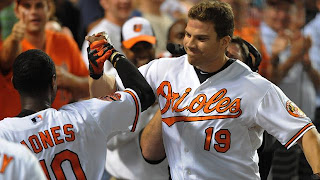 On the 17th anniversary of the greatest streak in sports, with the man responsible for the streak in attendance, the Orioles took back the Yard that had been over ran for the past 15 years by Yankees and Red Sox fans.

There are 162 games in a baseball season and most times one game is not make or break.  In fact many of you are probably thinking that I am over-appreciating one game (which I have be known to do), but quite frankly last night wasn’t just one game; I can’t stress the importance of last night enough!

The game was sold out – as it usually is when the Yankees bring their legion of parasitic fans to town – but for the first time in 15 years the crowd was Pro-Orioles.  And by Pro-Orioles I mean there was more orange in the crowd than a Jersey Shore Convention. For years Orioles fans stayed at home when the Yankees came to town because those games just were NOT an enjoyable experience.   The O’s would lose, the Yanees fans would let you know about it, your girlfriend would disappear at the end of the game, and she’d reappear the next morning with a gift basket and a baseball signed by Derek Jeter.

Yet last night was different because Cal Ripken Jr. was there.

Last night was different because the Yankees came to town for a pivotal 4 games series only up 1 game in the Division Standings.

Last night was different because for the first time in 15 years, a game in September really mattered.  The Orioles were not playing spoiler down the stretch, they are firmly and legitimately in the hunt.  Whether it is for 1 of 2 Wild Card spots or the A.L. East Crown, the O’s are in it!

Baltimore, at it’s heart, is a baseball town.  The white smoke stack right off I-95 used to have black and orange letters painted on the side that read BALTIMORE.  Now they are purple and gold and have been for the past 10+ years.  Last night was a reawakening for a fan base who has had Peter Angelos pissing in our faces and telling us it’s rain for the past 15 years.

Over the past 15 years I have watched 2,405 Orioles games.  In which the Orioles have lost 1,336 of them.  But last night reminded me why I stuck it out.  Last night reminded why I blindly believed in the potential of Larry Bigbie, the managerial decisions of Lee Mazzili, and the curveball of Daniel Cabrera.

When I heard the roar of the crowd last night through the TV and saw how packed the stadium was, it felt like 1995.  When the Orioles swatted six homers, every time sending the Yard into a state of euph-orange-ia and the rest of us running victory laps areound our living rooms, it felt like 1996.  When all of Birdland rose to their feet when an O’s pitcher got two strikes on a Yankee batter, almost willing that 3rd strike from the Baseball Gods, it felt like 1997.  For those of us born after 1983, those three years are all we have to cling to.

The 8th inning of last night’s game was a roller coaster of emotions.  With the Birds leading with a comfy (60-0 when leading after 7 innings) 6-1 advantage, the unflappable Orioles’ bullpen aka the Orange Curtain showed some leaks.  Randy Wolf ran out of gas and Petey Strop continued to be horrendous when brought in mid-inning.  He is lights out when he starts an inning, but he’s brought in with runners on…look out for the All-You-Can-Score-Buffet.

After Ichiro tied up the game and capped a five run 8th, my buddy Mish texted me “I’m flustered.”  I started to get that punch-in-the-gut feeling of “here we go again.”  Just your typical ulcer-generating, rip out your heart and stomp on it kind of losses to the Yankees that Birdland has grown accustomed to.

However, rather than agreeing with Mish, I responded with “The O’s bats will respond!”  I wanted to believe my text, I really did.  But history told me not to…

And then Matt Wieters singles to right…

And then MarK Reynolds lost one into the night.  Followed immediately by Chris Davis depositing one over the scoreboard in right field. 10-6 Birds, cue the Semi-Sonic because Jim Johnson was coming in.  It should come as no surprise that with Cal in attendance, the heroics were saved for the 8th inning in the game where We. Took. Back. The. Yard.

After the game Yankees manager Joe Girardi said this was just ONE loss.  But to a starved fan base and a hungrier team this was one for the ages.
Posted by Battle of the Beltway at 2:18 PM