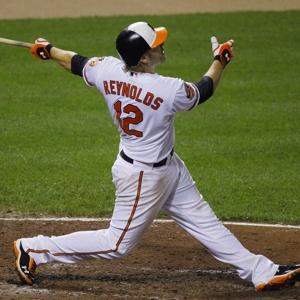 It’s no secret my disdain for MarK Reynolds is deeper than the Orioles’ starting rotation.  But I may be coming around on the free swinging slugger (a viable option for the title of the next Austin Powers movie).  This is not just a hair trigger reaction to his most recent hot streak (8 HR’s in 7 games), where I will just end up hating him again whenever he cools off.  Everyone knows that MarK Reynolds is inconsistent with ungodly hot streaks, soon followed by slumps that even bears are like “dude, wake up.”  If the baseball looks like a beach ball when he is hot, it must look like the mythical g-spot when he is in a slump.  Either way, this most recent hot streak has a different feel too it; one that just may stick.

My reasons for hating MarKy MarK are well documented and quite legitimate.  His defense at 3B was unforgivably bad.  He booted more groundballs than Cristiano Ronaldo and his throws were as accurate as Fox News.  Offensively, he was even more frustrating.  Swinging at (and missing) everything in sight regardless of the situation.  He stubbornly refused to make adjustments and the status quo for MarK’s at bats made my blood boil.

And then something clicked.  Maybe it was extra work w/ hitting coach Jim Pressley.  Maybe he has been reinvigorated by the team’s surge over the summer.  Maybe it was the call up of Manny Machado that told MarK, “we are going to turn it over to a 20 year old kid because your performance has been abysmal.”  Or maybe Buck sat him down and explained to MarK that either he figures it out or he will be unemployed.

For the first few months of the season MarK was swinging, flailing at everything.  Up, down, in, out, fast, slow, straight, breaking ball, Sleepy, Dopey, and even Rudoplh.  We all know about MarK’s low averages and high strike out numbers, but we could live with them because of his light tower power that was responsible for 35+ home runs every year.  However, this season the power was gone.  MarK was making contact with the ball as much as Ellen DeGeneres does with a pair of balls.  But for the first time in his career (or so it seems) MarK has made an adjustment at the plate.

Bare with me while I get all coachy and wax eloquently about the intricacies of hitting and the adjustments MarK Reynolds has made.  He essentially has split the plate in half.  He is now spitting (baseball-talk for “not swinging”) on pitches on the outside half of the plate; until he gets two strikes on him of course.  He is hunting the fastball down the middle and towards the inner half of the plate, aka “middle-in”.  By looking exclusively for the middle-in pitches, MarK is able to play to his strength of getting inside the baseball and pulling it.  By taking the outer half pitches he is also working counts and getting ahead, thus finding himself in hitters’ counts.  The batter has the advantage when the count is 3-1, 2-0, 1-0, 2-1, etc.  In these counts the pitcher has to throw a strike and more than likely that means a fastball is coming.  MarK Reynolds has put himself in better spots to be productive and it is clear he has a plan at the plate.

With MarK’s recent offensive surge stealing all of the headlines, we are over looking his much-improved defense.  And by much improved I mean being as far away from 3B as possible.  While at 3B Mark Reynolds had stone hands, but since moving to 1B his hands have become softer than what I imagine Minka Kelly’s bottom feels like.  He is snagging grounders glove side and to his backhand, sometimes while sliding on a knee.  He is scooping every bad throw and making picks like he’s played there his whole life.  His footwork around the bag is worthy of an offseason opportunity on Dancing With The Stars.  Just ask Tim Timmons.

The one thing he needs to work on is his over pursuit of grounders to his backhand side.  He needs to realize they are not his responsibility to field, but rather the second baseman’s.  Thus he must retreat back to 1B to receive the throw.  That all comes with feel and experience, which he is gaining every game.

The bast part about having MarK Reynolds at 1B is the only time he has to throw the ball (besides the old 3-6-3 DP) is when he is whipping it around the horn after yet another Zach Britton sinker that has been topsided by an opposing hitter.

I know this sounds like after 2+ seasons of hating MarK Reynolds I have pulled a Mitt Romney and completely changed my policy.  Don’t get it twisted, my venom is still reserved for MarK, but I wanted to give credit where credit is due.  This hot streak just feels different, but at the end of the day that’s all it is.  MarK Reynolds will cool off and join us back on Planet Earth.  Let’s just hope it’s at the end of October.


PART 2: The Night We Took Back the Yard

Posted by Battle of the Beltway at 2:27 PM