A few weeks back we debuted the rules and regulations for “Ripken,McNabb, Snyder” a.k.a. the DMV version of the legendary road trip game, “Marry, F#ck, Kill.”  In that initial post we laid out the ground rules and who epitomized these categories as it relates to D.C. Sports.  Certain times call for expansion or contraction of the idea, and this particular post is the former.
The NFL offseason was condensed into a three day free for all that can only be compared to a Steven Adler-esque bender.  In those three days we saw our beloved Washington Skinnies sign Barry Cofield, Stephen Bowen, and more wide receivers than Antonio Cromartie has illegitimate children (Correct us if we’re wrong, but we think the count is as at 8, A.C.).  Eh who are we kidding, everyone knows you don’t know the real number. We thought what better way to breakdown this preseason wide receiver battle than to pop the “Ripken, McNabb, Snyder” cherry.
Ripken: This is a guy who has a great future ahead in burgundy and gold.  He is a guy who came out of nowhere, bursted onto the scene, and was one of the 2.5 good things that happened with this ball club in 2010.  This is none other than second year wide receiver, Anthony Armstrong.  AA is 28 years old, and can be compared to that chick that was always cute but never got the attention from guys she truly deserved. She then turned into an absolute dime when she hit that 27-28 year mark, and spent the next five years exploiting her new found hotness leaving broken hearts in her wake.  Now in her mid 30’s she is ready to settle down with a wealthy unattractive lawyer in Mclean.  Armstrong will never be a number 1, but he will be that solid number 2 for the next 5-6 years.  Do you as a loyal fanbase take this super fast and talented wide out to be your Ripken? We do. 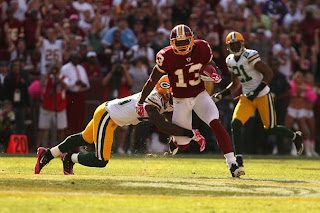 McNabb: We collectively let out a heavy sigh of sadness when we began writing this section.  Back in 2008, we were in the back of the team bus on a 3 hour drive through the shit towns of Pennsylvania when we heard the news Malcolm Kelly slid to the Skins in the 2nd round of the NFL Draft.  High fives were exchanged, hugs were given, and thoughts of this 6’5 gazelle snatching touchdowns and running glorious flag patterns were in our future.  If only the games were played in our heads, and Malcolm Kelly’s hamstrings weren’t made of Bill Cosby’s favorite afterdinner delight. Kelly’s career has been one hamstring pull after another thus never allowing him to reach his on field potential.  It seemed like a good idea at the time, but when we woke up in the morning and found that hippo in our bed, it was clear this just was not going to work out.  Sorry Malcolm, when we asked for your number the morning after and it looked like we were putting that number into our phone, we were really just playing Angry Birds.
Snyder: Donte Stallworth. This one’s pretty obvious. An eye for an eye motherfucker.
Campbell: After bursting onto the scene last year as a rookie and as a dynamic kick returner, Brandon Banks has been slowed with a bum knee this preseason.  The options for his 2011 season are varying between release, IR, or a super reduced role on special teams.  If there is a guy in need of a pity bang, its “B-Squared”.  He’s that girl that you take to the sack, give her the “old 1-2 how do ya do”, and she’ll get her confidence back and figure it all out.  Banks quickly became a fan favorite, and it would be a shame if he were lost on a count of having a dreaded case of the Malcolm Kelly’s. 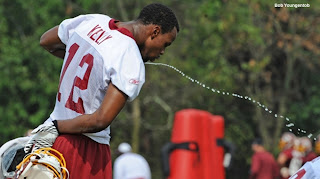 Now is the portion where we will introduce two next sections designed specifically for this article.  The first one is the Livan Hernandez, who we figure is that old reliable booty call that you know you can text at any point of the night and she will come on over.  In the words of Johnny Drama, this chick can’t spell NO!  Livan is a steady horse who eats innings and takes the mound every five days.  His health is never in question even though he is a bit on the husky side.  The player on the Redskins’ wide receiver depth chart who epitomizes this is Santana Moss.  Santana is this guy because he is the only person in the NFL who was happy to sign with the Redskins this offseason.  He has the confidence that this team can be a contender soon just like that chick has the confidence that you’ll eventually settle down with her.  I think I like the Skins chances better than Booty Call Betty’s.  Santana is a reliable target for quarterbacks, much like this girl is reliable to answer your drunken texts at 2:47 AM with a “see ya soon! ;)”
The final section is a bit of wrinkle.  WARNING: This could rub you the wrong way.  Does anyone remember the starting first basemen for the 2005 Washington Nationals? That was a rhetorical question to which most of you hopefully answered “no.”  The answer was Wil Cordero who logged some years in the Bigs, but is most known for one night when he got home from the ball park all liquored up and decided to go all Ike Turner on his wife.  We absolutely under no circumstances condone raising a hand to any female…EVER. However, if you are to raise your hand to a professional receiver on the Redskins, might we suggest Leonard Hankerson.  This guy has so much talent, that Jonathan Lipnicki is jealous.  However, in his two preseason games, HankTime has more dropped balls than a group of 12 year old boys.   Word out of practices is that he sometimes seems lackadaisical and uninterested.  For the record, we think the world of Hankerson and his wealth of talent, but a swift back hand from Shanny or Beckual Thunder couldn’t hurt this guy every now and again.
Posted by Battle of the Beltway at 10:26 PM