The thirteen of you who read our blog and follow us on twitter know that from time to time I will rant about my “doghouse” and her tenants.  The tenants for the most part are professional athletes from our beloved home town teams who have underperformed and become frustrating to watch game in and game out.  Many have passed through the hallowed halls, such as Mark Reynolds, Laron Landry (During the Zorn era), Gilbert Arenas, and of course Pete Kendall.  Reynolds is on vacation for a month or two, Landry has since changed his ways, Gilbert is living in someone else’s doghouse in Orlando, and no one knows or cares what happened to Pete Kendall.  Players come and go and few grow roots, but the select few are tenants for a while.  When the Redskins released Casey Rabach this morning, not only did the D.C. area lose a slow and washed up center, but the doghouse lost it’s landlord.  For the better part of the past six years Mr. Rabach has been the CEO of the doghouse and his roles included collecting the other tenants’ checks, preparing meals, and getting together with superintendent, Andray Blatche to make sure the rest of the place on the up and up. As it stands now there are 2 vacant rooms with Rabach’s departure and Carlos Rogers packing his stuff up expecting to move out.  Mike Gonzalez has lobbied for his own room, but that’s not happening so he will have to continue to crash on Andray’s futon for the time being.  I am currently accepting applications for those interested in becoming the new landlord of the doghouse, but before that let us delve into a brief history of Casey Rabach’s stay in the unfriendly confines. 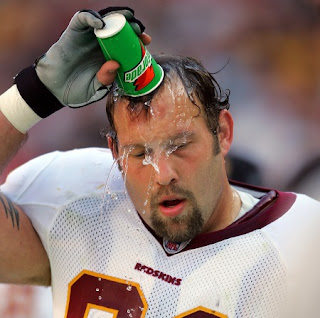 Rabach moved into the doghouse in week 2 of the 2005 football season when he stepped on then starting quarterback Mark Brunell’s foot causing the “8-Card” to stumble and wobble before getting pounced on by a pack of defensive linemen.  2005 was a very tumultuous year in the doghouse and it was very overcrowded.  Geronimo Gil and Luis Matos were bunkmates upstairs while Al Saunders was in the senior citizen wing down the hall.  Casey started out as a regular tenant and he did not even get his own room as he was forced to shack up with Jorge Julio and Brendan Haywood.  Sidney Ponson was the landlord and he was a bit of a dictator, living in the biggest room, skimming on the rent, and cutting back on the heat in the winter and the A.C. during the summer months.  However, in a flash of good luck Ponson’s tyrannical reign in the doghouse ended when he was extradited back to his homeland in Aruba and his job was left open.  After a series of holding penalties and false starts, Rabach was anointed landlord and has done nothing over the past six years to have that title stripped.  The false starts continued to pile up, quarterbacks in D.C. were continuously on their backs, and their ankles and feet were covered in marks from Rabach’s cleats.  Rabach has been consistent at drawing my ire week in and week out over the past six seasons which makes him an awful human being, but a great landlord to my doghouse. Thanks for the memories Casey.
Now on to the potential candidates to help fill the void…
Mike Gonzalez: We all know by now how I feel about this guy; I mean we nicknamed him “The Kraken” because he needs to be released.  He has done everything he possibly can to become the landlord, I mean his ability to get batters out can be compared to Casey Anthony’s ability to just do the right thing.  This guy allows more runs that Fat Albert’s tight whitey’s after some midnight munchies at Taco Bell. But with all that said if Mike Gonzalez cannot be trusted with the responsibility of being a mop-up pitcher on a bad baseball team, how can he be trusted with the responsibility of landlord in the doghouse?
APPLICATION DENIED.  It is time for the Kraken to head back to Blatche’s futon.  Speaking of Andray Blatche…
Andray has a tremendous resume and a knack for pissing me off so he is a very strong candidate to become the landlord.  The only thing standing in his way is the Wizards standing on my hometown team totem pole.  My passion and fandom for hometown teams is STRONG, but my passion for the Skins and O’s is like Giambi on sterroids whereas my passion for the Wizards is Giambi-post steroids.  Meaning, my passion for the Zards is still strong but there is a noticeable difference.  Then again John Wall could be the cycle of winstrol I’ve been looking for. I fully expect Blatche to continue to lack worth ethic, be woefully out of shape, shoot way to many jumpers, murder way too many possessions, and refuse to listen to coaching.  All of these make him a very promising candidate to be the landlord, but his playing for Wizards will only keep him as our superintendent.
APPLICATION DENIED.
Jayson Werth: Werth-less signed a $120 million deal, which is not his fault, I mean who would turn down that kind of offer?   However, he is hitting .219 with a measly 37 RBIs. He is hitting a brutal .211 with runners in scoring position and has not produced many runs at all this season.  He leaves more runners stranded than a the scared kid in a group of Columbia co-eds who take a wrong turn into Harlem.  It is tough to live up to that kind of contract especially when you are an average player at best.  Werth’s arrogance and overall prickish demeanor is what makes his contract so infuriating.  These are all viable reasons to be the landlord, but Jayson is simply not werthy of such a responsibility.  Just writing this about Werth has gotten me all fired up and I now welcome Mr. Werth into the doghouse! I will have Mike Gonzalez carry Jayson’s bags to his room aka the Ponson Penthouse immediately.  Welcome home Jayson.
The frontrunner for the position of landlord is the “Missionary on a Mission” John Beck, yet he has never found himself in the missionary position.  Is it fair that he has not even taken a snap under center and yet he is already the frontrunner to be the leader of this band of misfits, malcontents, and mediocre athletes?  No, it probably is not fair, but if this guy is our starting quarterback I think it is pretty obvious how it will go.  He has been cut by two different teams (Dolphins and Ravens) and did not even get an opportunity to play last year during the Grossman games.  I have a strong feeling that if this guy starts under center, he will put up terrible numbers, put the Skins defense in short fields, and ultimately gain control of being deemed “my least favorite player ever”.  Somewhere Danny Wuerffel is ready to give up the crown.  So consider yourself on notice John Beck.  I have left the Rabach Room open for you and expect you to move in sometime in September.
Other candidates include Mike Rizzo, Brian Roberts, Kareem Moore, Santana Moss’s hands, Alexander Semin, and the guy who bankrupted the Washington Warthogs.
Brian Matusz and Chris Tillman have banging on the door for months now, but I just cannot see myself opening the door for these guys, at least not yet.
As it stands now:
THE PONSON PENTHOUSE: Occupied by Jayson Werth.
BLATCHE’S BUNGALOW: Occupied by Andray Blatche (with Mike Gonzalez on the futon)
AL SAUNDERS SUITE: VACANT
THE RABACH ROOM: VACANT but awaiting John Beck.
Posted by Battle of the Beltway at 4:04 PM