F- Chris Singleton
The Wizards selected Chris Singleton 18th overall in last year’s NBA draft, and has been deemed by many NBA people as potentially the steal of the draft.  He had a standout career at Florida State and brings with him a solid offensive game and an even stronger defensive presence. As mentioned before, Singleton is from Florida State so we know three things, he’s got toughness to his game, he’s supremely athletic, and he has been brainwashed to think Bobby Bowden’s farts smell like Febreeze. He is only a rookie so it’s impossible to name this guy as underappreciated when he hasn’t even played a game, but he is definitely under the radar.  People only want to talk about Jan Vesely because he was the top pick for the Wizards, but Singleton will inevitably be a better player for the Wizards.  Singleton will make an impact on the Wizards immediately because he will be the plus defender on the wing that this team has needed worse than Paris Hilton needs to get her Valtrex prescription refilled.
THE WASHINGTON REDSKINS (THE LORENZO ALEXANDER DIVISION) 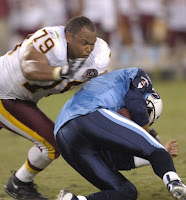 LB/DE- Lorenzo Alexander
When giving this segment a title, names ran through my head like Ladell Betts, Darnerian McCants, Lemar Marshall, and Ade Jimoh (anyone?).  But at the end of the day the most underappreciated Redskin of the past few years has got to Lorenzo Alexander.  Lorenzo has played all over the field, guard, tight end, linebacker, and defensive end.  He is a special teams stalwart and team leader.  He has done everything asked of him by the Redskins and then some.  His flexibility and ability to adapt to many positions on the field has made him an invaluable player for the Redskins ever since 2006.  Lorenzo will probably never be a full time starter in the NFL, but his contributions to special teams and in the locker room make him an unsung hero.  He has continually been a bright spot for the Redskins over the previous forgettable seasons, and deserves to be overlooked no more!
OG- Chris Chester
Think back over the past few seasons at how many times we had to hear Casey Rabach’s name called for holding or false starts.  This number is roughly 124,803, which is startlingly equal to the number of times I would like to kick Jerry Sandusky in the balls.  Quick sidebar: 124,803 is way to low for the number of kicks that should be administered to Sandusky’s nether-regions but I just don’t have the endurance in my legs to kick anymore times than that. But I digress; you NEVER hear Chris Chester’s number being called for silly false starts or dumb penalties.  The point I’m getting at is that Chris Chester is a massive upgrade whether he is playing center or guard. He has been a steady presence on the offensive line in a season where our offensive linemen have been dropping faster then a 12 year old’s nuts.  (WOW, I am really talking a lot about nuts aren’t I? I’ll try to rein it in!) Chester is very athletic for an offensive lineman, which was obvious when he ran a 4.84 40 yard dash at the scouting combine back in 2006.  A sub 5.00 40 yard dash for an offensive lineman is about as common as hearing Bill O’Reilly compliment President Obama’s decision making.  Chester is a good fit for the Shanahan zone-blocking scheme because of his athletic ability, agility, and high character.  He is a smart player who has a committed work ethic and can literally go a full game without ever having his name or number called.  This is the life of offensive linemen; the only people who recognize their contributions are their coaches, the quarterbacks, and the running backs.  Offensive linemen are the unsung heroes of football, but they are also the American Idol’s of the buffet line.
There you have it, the first annual Washington’s Sneaky All-Stars Team, if you think we missed anyone shoot us an email at beltway.battle@gmail.com or tweet us @Beltway_Battle.
Posted by Battle of the Beltway at 5:32 PM