Raise your hand if you’ve been swept up in TEBOWMANIA.  I’m not going to lie to you, I’ve got both of my hands raised.  So how the heck am I typing? You don’t wanna know.  But it could be this Tebroner I’m sporting… 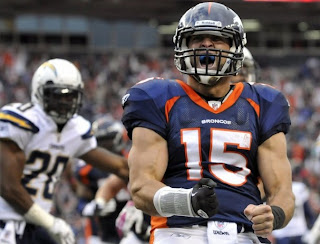 Anyways, incase you’ve been living under Andy Reid’s boob flap for the past 6 weeks, Tim Tebow has sparked the Denver Broncos and led them right into the thick of the AFC playoff race.  It ain’t pretty, but he gets the job done.  Watching a full Denver Broncos game is a lot like that one girl from college that you hooked up with.  Come on you remember her, she was the terrible kisser, and she never quite knew what to do.  But the icing on the cake is that she never gave you anything more than an OTPHJ (over the pants hand-jibber), and you always seemed to be wearing jeans.  Yet when it was over you had a smile on your face and you called her up the next weekend. How did that absurdly visual tale not remind you of a game started by Tebrow!?!? OK. OK. What I’m trying to say is, Timmy Touchdown always starts off slow and a little bit awkward, and even though its never pretty he comes through at the end no matter how painful it was to watch.  And at the end of both the game and that awful hook up you’re left with a stain on your Levis that only the finest dry cleaner can get out.
The dude is a winner, he gets in less trouble off the field than a nun, and yet MANY people still hate him. One reason could be sheer jealousy, or maybe it’s the fact that his passes are less accurate than FOXNEWS reporting.  However, I believe the main reason for the hatred towards Tebow is the fact that he is a little over the top with all of the God stuff.  In America, everyone is entitled to their own religion and can conduct themselves accordingly, and to this I say TEBOW Bless America. Too far? Probably.  In all seriousness, I would tend to agree with the circle of people who feel Tim Tebow is a tad in your face and over the top with his religion.  I get how that might rub some people the wrong way, but like it or not Tebow has a platform in which many people will be able to see and hear him.  Other athletes have done a whole lot worse with their public platforms… 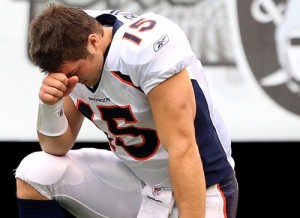 A couple of weeks ago I was told it was impossible to sneeze with your eyes open, so over the past week or so every time I sneeze I try to keep my eyes open.  I have yet to succeed and I actually popped a blood vessel in one of my eyes.  So if you see me walking around and my right eye looks like Charlie Sheen’s after a weekend in Cabo, do not be alarmed.  This is why I am such a big Tim Tebow fan because he loves being told he cannot do something and then going out and proving them wrong.  Granted pursuing your dreams as an NFL quarterback is completely different than trying to keep your eyes open when you sneeze, but you catch my drift.  Even though he was one of the most prolific and winningest quarterbacks in college football history, “experts” and analysts said he would be a fullback or a tight end in the NFL.
One of his biggest critics has been Trent Dilfer, a guy who completed 55.5% of the passes he threw in his relatively pedestrian career. Trent Dilfer also had a career QB Rating of 70.2…well below what is considered average.  Dilfer has the ultimate trump card, which is a Super Bowl ring, but I think even Rex Grossman could have won a ring with that Ravens team, cut to Ray Lewis nodding in agreement.  Granted Tebow has started way less games than the guru known as Trent, but his QB rating is at 81.1 and he gets better and better with every game.  His throwing motion ain’t pretty and his passes are fairly inaccurate but he has proven time and again that he has a tireless work ethic and his heart is bigger than Albert Haynesworth’s waist line.  As of right now, his intangibles are outweighing his shortcomings as a passer and his teammates believe in him and love him.  You have to believe that his shortcomings as a passer will steadily improve.  Even his coaching staff believes in him evidenced by their willingness to completely revamp their playbook in order to fit his unique skill set.  Head Coach John Fox may have said some unflattering things publicly about his quarterback, but he is beginning to believe in Tebrow based on the fact that he asked #15 to give a speech to his teammates the night before last Sunday’s game vs. the Chargers.  The only person with the Broncos who has not fully bought into Tebowmania may be the most important person, the Executive Vice President of Football Operations for the Denver Broncos, John Elway.  In other words John Elway makes roster decisions and he holds Tim Tebow’s fate in his hands.  But with a 5-1 record what other numbers could Elway possibly be looking at? 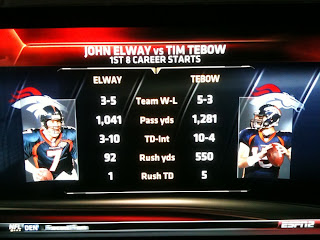 I do not know what goes on behind the scenes at Broncos headquarters but maybe Elway is not sold on Tebow because he didn’t draft him, or maybe it’s because Tebow is making people forget about good ol #7.  Only those involved will know for sure, but I've got a feeling Elway is going to becoming around pretty soon.  I mean for Tebow’s sake! This guy is a unique talent and will only continue to improve.
I’m drinkin’ the Tebrew by the gallon because he is exciting and fun to watch.  Tebow plays a different style of football and his teammates have responded.  He has taken all of the unrelenting criticism in stride and used it as motivation.  While Tebow has gotten all the attention, the defense has truly been the anchor.  They keep the game close enough so Timmy Touchdown can work his magic at the end.  And time and time again Tebow has come through in the clutch when his teammates needed him most. Just ask Rex Ryan.
Questions, comments, concerns, please do not hesitate to email us at beltway.battle119@gmail.com
Follow us on twitter @Beltway_Battle
And Check us out on Facebook at “Battle of the Beltway” for updates, posts, and pictures of Tyler in scantily clad clothing.
Posted by Battle of the Beltway at 2:34 PM