Stop me if you’ve heard this before, but Stephen Strasburg is a special pitcher.  I know that’s not exactly earth-shattering news like a professional basketball player coming out of the closet (BIG KUDOS TO YOU JASON COLLINS!), but it’s a fact. 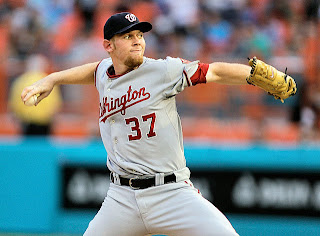 For the better part of the month of April, Stephen Strasburg has not looked right, nor has he put up the numbers we in Natstown are used to.  It has been obvious to anyone who has watched him pitch this season that he has struggled commanding his fastball. Unfortunately this goes a little further than his inability to command his fastball, and it has to do with his faulty mechanics.

Stephen Strasburg is doing what those in the baseball world call “flying open.”  This does not mean that he forgot to zip up his jeans, but rather he is letting his front side open up towards the first base side.

Lets sift through this jargon so we are all on the same page.  When a right handed pitcher throws to the plate he wants his left shoulder and left elbow to stay facing the third base side and aimed directly at home plate until his left foot (lead foot) lands and plants.  Once he plants then his torso and right side of his body can rotate through.

Strasburg, however has let his left shoulder fly open causing his whole left side to fall off towards the first base side of the mound, hence why he has been throwing a lot of fastballs into the left hand batter’s box.  It only seems like he is doing this mechanically when he throws fastballs, which may mean he is trying to overthrow his fastball or throw it harder than he is capable of.  Which if that’s the case, is just absurd because he still throws 96-97! Trust me, hombre, that is plenty fast enough.

Our concern with Strasburg’s off-kilter mechanics is the fear of injury.  Poor mechanics (scap-loading, the inverted “W”, and a leading right elbow) have already led to Tommy John Surgery.  Flying open can lead to unnecessary torque on the throwing shoulder, as it has to work harder to get across the body as it all falls off towards the first base side.  It’s almost like he’s pulling his right shoulder across his body. That can cause some strain on the old bazooka, cut to Strasburg’s rotator cuff nodding in agreement.

But what makes Strasburg so special, is the fact that despite this obvious mechanical flaws, he is still able to cut outs and turn in good starts for the Nationals.  He has been dominating at times, but not as consistently as someone with his talent should be.  He is the best pitcher in a talent-laden rotation, despite his 1-4 record.

Hopefully a little McCatitude can get Strasburger’s mechanics ironed out and he can get back to the dominating right-hander that he is.  Until then he will just have to navigate through lack of command, high pitch counts, and the never-ending threat of injury. However, if there was ever a pitcher who could cut Major League Batters up while working through poor mechanics, it’s the special and talented Stephen Strasburg.
Posted by Battle of the Beltway at 9:39 PM No comments:

Jake Arrieta was optioned to AAA Norfolk today. Typing that sentence hurt worse than wearing one of Jake’s 96 MPH fastballs in the kneecap. Those of you who have read my previous Birdland Bulletins know my gushing feelings for Jake Arrieta and his transcendent stuff on the mound.

While consistency has always eluded Arrieta, I refuse to give up on him because he has the stuff to be a top end pitcher.  While his arm maybe worth millions of dollars, his worst enemy has always been between his ears.  The hope is that another stay down on the farm in Norfolk will get Jake right, and help him iron out his mental mechanics.  Hopefully Tides’ pitching coach Mike Griffin and Orioles Pitching Coordinator Rick Peterson can get Jake back on the fast track to dominating Major League hitters.

In order to do this, Arrieta may need to get back to basics while getting his mind right.  Basics so elementary in fact, that we have banged out an ABC’s of list what Jake Arrieta may want to do in order to get back to the Big Leagues.  Some of these are general observations and others are helpful tips. 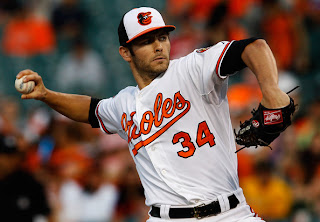 A- ATTACK
You gotta attack the strike zone with strikes early and often.

B- BALL ONE
Avoid throwing ball one on the first pitch like Ryan Flaherty avoids making contact.

C- COMMAND/CONTROL
Arrieta’s lack of control has been his biggest weakness.  He fails to command all of his pitches and thus finds himself in many 3-ball counts.
-CONSISTENCY
Arrieta will have innings where he will throw 12-13 pitches and be lights out.  Then he will promptly follow that up with a 35 pitch walkfest the next inning.  He must be consistent and piece together quality innings.

D- DEDICATION
By all reports, this is not a problem for Arrieta.  He was spotted in the video room today, even after receiving word that he was headed to Norfolk. His commitment and dedication is there, which leads me to believe he CAN GET RIGHT!

F- FUN
Get back to having fun out there on the mound.  Get back to playing the way you did when you were a kid. Pitch with that carefree dominance that you had as a Horned Frog at TCU.  Block out all those negative thoughts in your head and let it fly!

G- GOALS
Set attainable goals while you’re down in Norfolk. Once you reach these goals set new ones. Set ‘em, reach ‘em, and then get back to Birdland!

H- HEATER
Arrieta’s heater can be his best weapon, and his biggest enemy.  When he can’t throw it for strikes or leaves it up in the zone he gets pounded. Command the heater and pitch off of that.

I- INTELLIGENCE
Become a “pitcher” and not a “thrower.”

J- JURY
As in, the jury is still out on Arrieta.  Is he a big league pitcher who can harness his overpowering stuff, or is he just another hard throwing flame-out who couldn’t command his pitches?

L- LOVE OF THE GAME
If you haven’t already seen this Kevin Costner classic it’s worth the watch. But seriously, just like with FUN, Jake’s got to get back to his love of the game and why he plays.

M- MOXIE
Arrieta’s gun-slinging bravado that he takes to the rubber every game is what makes me believe he can iron out these mental struggles.  He needs to maintain this moxie while he is down in AAA and come back to the Bigs with more swagger than John Wayne’s nutsack.

N- NEGATIVITY
Block out the negativity whether it is internal or external.  Mind over matter…if you don’t mind then it don’t matter!

O- OUTS
Collect them like the number of Tom Selleck fans at a Mustache convention.  It’s easier to get outs when the count is 1-2 or 0-2.

P- POISE
Keep your poise even if you start to feel your control leaking.  Maintain your focus and your confidence. Be the calmest person in the ballpark.

T- TOUGHNESS
­Your mental toughness is what will get you back to the Big Leagues.  It will also be your best friend when dealing with failure and frustrations.

U- UNEARNED RUNS
There will be plenty of these. Do not let them derail you and force you to lose focus.  Control what you can control!

X- X-FACTOR
Arrieta’s off speed pitches are his X-Factor.  Every professional hitter can handle 96 MPH, but when a pitcher couples that with knee buckling breaking balls and string-pulling change ups, he can be unhittable.

Y- YOURSELF
That is the only person preventing you from being an effective big league pitcher. Believe in yourself because there are still plenty of us in Birdland who still do!

Z- ZEROS
FILL UP THE SCOREBOARD WITH ZEROS!

Get right down on the farm, Jake. There are still plenty of us in Birdland who still know you can be an integral part of the Orioles rotation this year and for years to come.
Posted by Battle of the Beltway at 5:47 PM No comments:

A Letter to a Monster

You will come through these emergency surgeries. You will make it through the night, but not because you deserve to.  You will wake up in the morning because you are in the hands of some of the best doctors in the world; American doctors.

You have lived in a country where even after the atrocities you committed, doctors are still willing to operate on you and save your life from the significant injuries you have sustained.  If you committed this heinous crime in your home country, you would probably be dragged through the streets, and suffer even greater pains. But here in the country you have called home for 11 years, (and sought refuge in) doctors strive to save your life because that is their job.

After you recover from your injuries and are physically able to move, you will go to trial for your roles in the murders of Martin Richard, 8, Krystle Campbell, 29, Lingzi Lu, a Boston University Grad student, and Sean Collier 26; as well as the injuring and maiming of 100+ innocent victims.  You will stand trial under the United States of America where even you are granted the right to a fair and speedy trial.  You will be granted a jury of your peers, even though you deserve no more wasted time in our country’s limelight.  You deserve swift justice and a sentence worthy of a thousand crimes.  Not only will you stand trial for the painful loss of life and limbs, but you will also stand trial for raping our country of our innocence.  You will stand trial for taking a sacred and proud day in the city of Boston and turning it into a day of horror and violence.

The cowardly acts executed by you and your brother will unfortunately be etched in our history’s memory, but you have also shown the greatness of America.  The city of Boston stared down the eyes of the Devil on Monday and they did not blink.  You brought violence and horror to our lives, but you also brought out heroes and you provided a platform for the good of our country to rise from the ashes and help their fellow citizen. 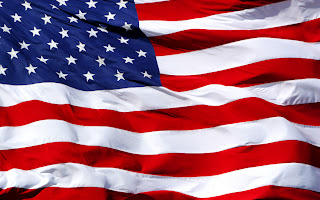 Posted by Battle of the Beltway at 11:39 PM No comments: