Breakin' It Down With Dr. Dilfer: Robert Griffin III

Our beloved Washington Redskins will be selecting near the top of the Draft come next April, and it is no secret that the biggest hole they need to fill is at the quarterback position.  Redskins Nation, whether it’s the team or the devoted fan base, cannot afford to enter another season with Rex Grossman and John Beck duking it out at the top of the depth chart.  This year’s draft class is projected to be one of the deepest in recent memory as far as quarterbacks are concerned, headlined of course by projected number 1 overall pick Andrew Luck, USC’s Matt Barkley, Heisman Trophy winner Robert Griffin III, Arizona’s Nick Foles, and Oklahoma’s Landry Jones.  Everyone and their mother expect the Redskins to select a quarterback with their first round pick, hell if Matt Millen was the Redskins GM, even he would select a quarterback.  Seeing as Luck will be off the board after the Colts select number one, it makes the most sense to delve into the remaining quarterbacks in the 2012 NFL Draft Pool.
However, we are just amateur bloggers, and when it comes to football the only thing we are good at are watching it, criticizing the professionals, and cracking wise. Therefore who better to help breakdown the nation’s top quarterback prospects than ESPN’s Trent Dilfer? I know your instinct is to stop reading and go back to whatever you were doing, but in the words of John Lennon, “Give Trent a chance!”  What Dilfer lacked in physical abilities as a quarterback he made up for with his cerebral approach to the game.  Dilfer has become one of the top NFL analysts on television especially when it comes to breaking down the quarterback position.  He has mastered the art of analyzing and dissecting the intricacies of playing quarterback, while keeping it in laymen’s terms for all of us to understand; sort of.  Therefore we have enlisted the Quarterback Guru Trent Dilfer to help us breakdown this year’s crop of signal callers.  And by helping us breakdown we mean reading his tweets (@TDESPN) and translating them so we all can all get a better idea on who the Redskins will be looking at in April.
Today’s prospect is Heisman Trophy Winner Robert Griffin III out of Baylor. 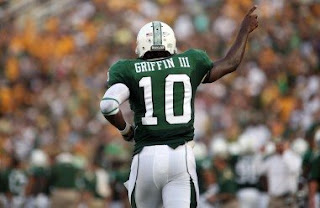