I hate saying “I told ya so”, but I mean I told ya so.  Train Rex is officially off the tracks, and Shanny has named John Beck the starting quarterback of our beloved Washington Redskins.  I mean really, how bad did Rexual Harassment play that we are all jazzed up about a quarterback who has four career starts, and is so unrecognizable that he has to wear a shirt with his name on it?  Lost in Rexually Frustrated’s terrible play is the fact that the Redskins are 3-2, which seemed pretty unthinkable just a few months ago.  But this is a very misleading 3-2, it feels good yet it just doesn’t feel right.  It is kind of like that feeling you get after rolling off a fat girl; yes you got your rocks off, but you are met with this immediate regret, disappointment, and feeling of uneasiness.  That’s how Rex made Redskins Nation feel; of course we were stoked to be 3-1 before that horrific Eagles game, but those 3 wins felt cheap and dirty.  Either way we have all been Reuxally Assaulted and it is time for some Beckual Healing. 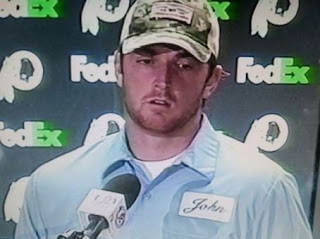 Honestly, I didn’t come here today to talk about the current Redskins quarterbacks, but rather I wanted to discuss with you a former Redskins quarterback who has had more ups and downs in his career than a Tony Romo led fourth quarter.  I want to express my deepest sympathies for Jason Campbell, whose career has been marred by more turnover than a Rex Grossman stat line.
In the midst of a solid season, while at the helm of a 4-2 playoff contending team, Jason Campbell was dealt yet another blow to his topsy-turvy NFL career when he broke his collarbone.  In his 7th season the stars were finally aligned for Jason Campbell to be a successful quarterback in the NFL.  By stars I mean, working with the same coach for two years in a row, a stable-ish offensive line, and a great running game.  His receivers weren’t exactly top notch, but lord knows he’s done a lot worse. Hue Jackson is in his first season as head coach of the Raiders, but he was the offensive coordinator there last year and has trust and familiarity with Campbell.  In JC’s 3 ½ seasons as a Redskins starting quarterback his offensive coordinators included an old senile guy who let the game pass him by back in 1994,  a former QB’s coach who thought this was a good play call, and finally a guy who was more comfortable calling “G-17…we’ve got a bingo from Mrs. Baxter!”
Everytime Campbell showed up for training camp he was being introduced to a new offensive scheme; his head was spinning faster than Ron Washington when there is a runner on second.   Could you imagine if you showed up for work every couple of months to find out you had a new boss who was changing everything about your department?  You would probably quit and start looking for a more stable company to work for.  Well stability is not exactly a buzzword around Redskins Park, especially not during Campbell’s tenure.
When the Redskins first acquired Donovan McNabb I was pissed!  I was such a Campbell loyalist and thought it was so unfair that Shanahan was willing to deal for 35 year old rather than see what he had in Campbell.  I then took a step back, and decided that Donovan’s track record was very solid, and this gave Campbell the opportunity to be traded to a franchise who was hopefully more stable and less circus-esque than the Redskins.  He was traded to the Raiders.  Seriously football Gods?!?! What do you have against this guy? He’s been classy, respectful, and hard working amidst some ridiculous circumstances and you banish him to football hell?  Al Davis (may he rest in peace) ran that franchise over the past decade like his hair was on fire.  The only person less fit to run the Raiders is Michael Lohan, and even he wouldn’t have been dumb enough to hire Lane Kiffin.  However, Campbell was excited by the opportunity and immersed himself in silver and black.  He took his lumps under then head coach Tom Cable, including being benched in week 2 only to see his team lose three straight games.  Campbell was reinserted into the starting lineup and led the Raiders to a respectable 8-8 finish.  This was pretty impressive considering the Raiders had not won more than 5 games since 2002. Cable was then fired and Hue Jackson was promoted to head coach.  Campbell finally had some consistency, minus the whole Lockout thing.
Campbell’s broken collarbone ended a promising/vindicating season and with the Raiders trading for Carson Palmer yesterday, it all but ends Campbell’s time in Oakland.  Another offseason will come, another team will take a chance on JC, and he will have to learn yet another playbook.  Jason Campbell has always deserved better than what has happened to him in the NFL, but he has never complained, never griped, and always remained positive.  He has remained confident in himself and his abilities and he WILL land another job and hopefully that is the place it all comes together for him.  I wish you the best of luck Jason, and I will always be on Team Campbell.
Career Stats:
64 Games Started.
68 TD’s
46 INT’s
13,247 yard.
27-37 Record
347 Offensive Coordinators.
Questions, comments, concerns, please do not hesitate to email us at beltway.battle119@gmail.com
Follow us on twitter @Beltway_Battle
And Check us out on Facebook at “Battle of the Beltway” for updates, posts, and pictures of Tyler in scantily clad clothing.
Posted by Battle of the Beltway at 11:16 AM