A Call for Cousins

By Ben
Sacramento Kings Power Forward/Center DeMarcus Cousins is unhappy and has demanded a trade. In more shocking news, the Sun is really hot and the Pacific Ocean is full of water.  DeMarcus “Boogie” Cousins has been a distraction for the Kings from the second he was drafted and has been labeled as immature, a malcontent, and a distraction.  Essentially he is Andray Blatche, but with a lot more talent.  Boogie and his head coach Paul Westphal get along as well as two drug dealers slinging on the same block. Boogie has a ton of talent, but is in dire need of a change of scenery. See what I’m getting at here folks? Yes, that is right! I am campaigning for the Washington Wizards to make a trade for Demarcus Cousins and give him the change of scenery and a fresh start that he desperately needs.
On the surface, I’m sure this looks like a player that the Washington Wizards need to avoid.  This is a young impressionable team that has about as much older veterans than a Internet start-up company, and many will say that the last thing the Wizards needs is another combustible headcase. These same people will also say that this team needs more of a veteran prescence in order to show these young bucks how to conduct themselves as professionals and as basketball players.  And I completely agree with this sentiment, but what this team also needs, is TALENT! The lack of talent on this team cannot be overlooked.  John Wall is a budding superstar, but he cannot develop fully with this collection of clowns that Ernie Grunfeld has surrounded him with. I'm talking about you Nick Young and Javale McGee.  John Wall will probably average 6-7 assists per game this year, but with better teammates he could average 9-10 assists.  Seriously, folks we are two years away from watching John Wall leave via free agency to team with more talent, aka Cleveland 2.0.
DeMarcus Cousins and John Wall were teammates for one season at Kentucky and are well documented best friends.  They are also supremely talented, but are still learning how to be professionals.  John Wall appears to be much more mature than Boogie, but his frustration with his teammates could soon boil over, and this worries me greatly.  The best way to keep John Wall happy, and more importantly in a Wizards uniform is to trade Andray Blatche, Jan Vesely, and the 2nd round pick they just received from Dallas for Boogie.  This may seem like a lot to give up to acquire a guy who has so much baggage that even Southwest won’t let his bags fly free. But here are two reasons on why this trade could work:
1) Blatche is easily the most vilified athlete in D.C. right now.  He lacks work ethic and drive, and gets along with Flip Saunders as much as Santonio Holmes gets along with Mark Sanchez.  Blatche is a cancer for the Wizards and Cousins is a cancer for the Kings.  The two teams should chemo their rosters by giving each of their problem children a change in scenery and a fresh start.  Cousins may be a cancer, but he is benign where as Blatche is malignant. There is no cure for Blatche, he has been in the NBA for 6 seasons, has not matured one bit, and has been enabled by coaches and management from the get go. HE IS A LOST CAUSE. Cousins has had a rough start to his career thanks to fights with coaches and teammates, and trade demands as common as a sneeze, but he can still take substantial strides in his development and maturation because he is only 20 years old.
2) As I stated earlier, John Wall and DeMarcus Cousins are the best of friends. They train together in the offseason, and probably have had discussions of teaming up like Lebron and D-Wade did as soon a their rookie contracts are up.  Why not letting them pair up right here in D.C. right now?  By pairing Cousins up with his best bud, the Wizards could let them go through the rigors of the NBA season, which could be monumental for them both.  Cousins needs to be around people he trusts, and the calming presence of John Wall could be just what the doctor ordered for the Boogie Man. 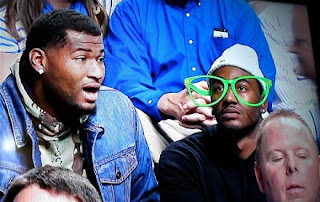 The Wizards are a young bunch, who desperately need a talent transplant. DeMarcus Cousins is no angel, in fact he deserves a halo about as much as Lindsey Lohan but despite all of his baggage, he could be the talent that the Wizards really need to get going in the right direction.  The Wizards will be selecting in the top 4 in the 2012 NBA Draft, which is more loaded than Ryan Braun’s protein shake.  A core three of John Wall, DeMarcus Cousins, and that high draft pick paired with solid role players like Chris Singleton, Jordan Crawford, and Trevor Booker is a nucleus I would love to watch grow into a contender a la the Oklahoma City Thunder.  If you can surround that group with some quality veterans and even Javale McGee, then you’ve got a team that will contend in the Eastern Conference for years.  Taking on Boogie is a bit of a risk, but what’s there to lose in a season in which the Wizards may not even win 10 games? Come on Ernie, do it for the team, the fans, and frankly your job security.
Posted by Battle of the Beltway at 2:32 PM