Today is April 1st, and I’m sure many of you are running around pranking each other because it is April Fools, but I am going to sit back and reflect.  I am going to reflect because today was supposed to be Sean Taylor’s 28th birthday.  Sean T. was my favorite player and his passing was the darkest day in my life-time Redskins’ fan hood.  I was crushed because I was a huge fan of him as a football player and as a man, but I cannot fathom the pain that was felt by his friends and family.  I was lucky to have been able to watch “Meast” patrol the Skins secondary for 3 ½ seasons, and only wished he could have lived in order to become the Hall of Famer he was meant to be on the field and off the field.  We bring you Top Ten lists every Friday so I thought I would write my top 10 Sean Taylor memories to help remember the very talented, timeless young man, and a fan favorite of a loyal and burgundy-bleeding fan base. 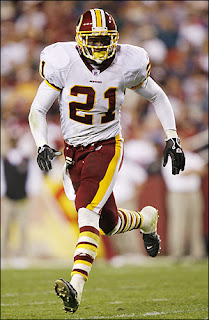 10) I remember watching Sean Taylor play as a Miami Hurricane against the Florida State Seminoles during his junior season.  This was the first I had ever heard of Sean T. and I was totally mesmerized by his hard hits, impeccable speed, and overall vision for the game.  I immediately pictured him in a Redskins uniform and just hoped of all hopes the Skins would get the chance to draft him in the upcoming NFL draft.
9) I remember sitting in my basement with my good pal, Mish, and watching the 2004 NFL Draft.  Joe Gibbs had been hired as the Redskins Head Coach in an attempt to restore the glory.  The Skins had the 5th overall pick in the first round and pundits were predicting the Skins to draft either Sean Taylor or tight end and Taylor's Miami  teammate, Kellen Winslow.  Mish was hoping for Winslow, and I was desperately pleading for Sean T. And then this happened.  I jumped out of my seat and screamed (wait til the :04 mark).  He immediately became my favorite player, and the guy I was excited to watch for the next 12-15 years.
8) I remember sitting in a small hotel room up in the mountains near Yosemite National Park, with shoddy reception watching the Redskins play the Denver Broncos in the "Hall of Fame Game" during the pre-season.  I remember getting my first glimpse of Sean Taylor in the burgundy and gold, wearing the #36.  He looked like such a beast with the big shoulder pads and the black visor.  This is where we Skins fans really began to understand what the term “ballhawk” meant.  Taylor buzzed all over the field and had two INT’s including one he returned for a touchdown.  His athletic ability was evident, and he was just scratching the surface.
7) I remember the first time I saw Sean Taylor play in person.  It was Week 10 of 2004 during his rookie season.  The Skins had a home game vs. Carson Palmer and the Cincinnati Bengals.   I watched #36 during stretching lines, warm-ups, all the way up to the opening kickoff.  He was so amped up and intense!  There was no question that he had come to play and take care of business that day.  On the very first play of the game, Carson Palmer dropped back and launched a beautiful deep ball down field, and Sean T. came from across the field, and closed in and snatched the ball out of the air!  The Skins ultimately lost that game, but the image that stuck with me was the great game Sean Taylor had played.  8 tackles, 1 INT, and lord knows how many bone rattling hits.
6) I remember the Redskins needing to win 5 games in a row in order to make the playoffs in 2005.  I remember Clinton Portis putting the team on his back, and I remember Sean Taylor (now wearing his iconic #21) scoring the game clinching and Playoff spot securing touchdown in Philadelphia in Week 17.  He came out of nowhere in his ball-hawking style, and scooped up the loose ball, stiff armed the puny Koy Detmer and SOARED into the endzone for six!  ) I remember one week later in the Wild Card Round, the Skins headed to Tampa Bay to play a Buccaneers team.  In the first quarter there was a play that was the epitome of Sean Taylor, playing hard and playing through the play all the way to the whistle.  And then TOUCHDOWN!
Sean Taylor was ejected from this game for allegedly spitting in the face of a Tampa Bay Buccaneer Running Back Michael Pittman.  The Skins ultimately won, so kiss our burgundy and gold behinds.
5) I remember Sean Taylor’s off the field issues.  There was a DUI arrest, an armed assault arrest, and an eventual plea agreement.  Sean was young with a lot of money and he may have been a little immature.  And the media (who really did not know much about Sean Taylor) had a field day trying to paint him as a thug and a hot head.   I remember being a part of a fan base that rallied behind our player, and watched him prove us all correct by maturing and really heading down the right road.
4) I remember the dominating start he had to the 2007 season.  He was everywhere in the secondary, going sideline to sideline, laying hard hits and knocking down passes.  It had appeared that Sean Taylor had put it all together and was emerging as one of if not THE best safety in the entire league.  I remember in week 6 when the Skins played Brett Favre and the Green Bay Packers at Lambeau Field.  It seemed liked Favre was having a catch with Sean T. because number #21 was getting his hands on every pass!  He ended the game with two interceptions, but dropped 3-4 more.  It was truly an awesome and dominating performance by an elite athlete.  He had racked up 5 picks in 6 games and was showing no signs of slowing down, until he hurt his knee vs. Philadelphia in week 10 and had to leave the game.  This would be the last time anyone saw Sean T. in a Skins uniform.  His absence was obvious as the dormant Philly offense exploded following Taylor’s exit, and won the game.  Taylor missed the next two games against the Cowboys and the Buccaneers in which the Skins lost.  The Tampa Bay game was a tough pill to swallow because the Skins gave it away and the fan base’s anger over the tough loss was soon to turn to epic sadness. 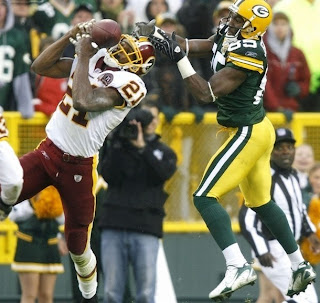 3) I remember everything about the tragedy of Sean Taylor’s death.  It was the Monday (November 26th, 2007) after Thanksgiving Break and I was sitting in my apartment at school.  I had just come back from the gym and was sitting down playing Madden before heading to class, when my roommate and fellow Blogger, Tyler came in the room white as a ghost.  He said “dude turn on ESPN, my mom just told me Sean T. got shot.”  I immediately fumbled for the remote and clicked on ESPN to see scrolling on the bottom line, that Taylor had in fact been shot and was in critical condition.  I said screw this and turned on Comcast Sportsnet to get the most up to date and accurate coverage.  Neither of us left the couch that day, eagerly awaiting updates with either the result we all wanted or our worst nightmare coming true.  Later on in the evening Kelli Johnson came on with “Breaking News” and my heart was in my throat hoping for good news.  Her report was that Sean T. was responsive, his eyes were open, and that was all they had for now.  I then remember her last words of the telecast, “We are by no means out of the woods, but this appears to be the good sign we’ve all been waiting for.”  I went to bed that night still worried, but at ease.  I had an 8:00AM class on Tuesday November, 27th and was up at 7 and checked my email like I did every morning.  For whatever reason, I didn’t sit down and just stood up leaning over my desk, and I saw an email from my dad whose subject line was “What a shame. I’m real sorry buddy”.  My face got flush and my hands again fumbled for the mouse to open the email, in which I found out from my father that one of my champions, and my favorite player was dead at 24 years old.  My legs immediately felt like jelly and I stumbled backwards until the back of my legs found my bed and I plopped down.  I put my head in my hands and lost it.  Tears flowed and sadness crept through me selfishly.  What about Sean’s young widow and now fatherless baby daughter?  What about his mother and father who just lost their son? What about Clinton Portis and Santana Moss who lost their brother, and the other Redskins who lost their teammate?
2) I remember the response to Sean T.’s death.  I remember the fan base rallying together and showing support for Taylor’s family and for our beloved Redskins.  I remember what seemed like the longest four days until the Redskins game on Sunday vs. the Buffalo Bills.  I remember all of Sean T.’s teammates coming out and saying this guy was not a thug, but a matured family man who had been changed by the birth of his daughter.  I remember the definition of a man’s man, Joe Gibbs, being racked with sadness, yet somehow being the leader he is and rallying this football team together.  I remember the game on Sunday vs. the Bills when the Redskins defense lined up with 10 men for the first snap in tribute to their fallen brother.  I remember Joe Gibbs calling back to back timeouts to ice the Bills’ kicker at the end of the game, only to be hit with a 15 yard penalty thus giving Rian Lindell all he needed to hit the game winning field goal in a game that the Skins and their fan base desperately needed in order to ease the pain they were all going through.  I remember skipping class to watch Sean T.’s funeral which was televised on all of the local stations.  I remember Sean T.’s closest teammates Clinton Portis and Santana Moss playing some of the best football of their careers and leading the Redskins on an improbable 4 game winning streak to finish the season at 9-7 and clinching the final playoff spot.  The Skins won at home in week 17 against the Dallas Cowboys to secure the final spot by the score of 27-6…21 points.  Throughout those games it seemed like there was something special happening with this team and it was clear that from up above #21 had one last great play to make for this team.  The dream ended in the Wild Card round in Seattle, but his memory and the memory of the 2007 was just beginning.
Listen to Sean T.'s coaches and teammates pay tribute to their brother.
1) Most of all I remember the great joy that watching Sean Taylor play football brought me.  I remember the great sadness his death also brought me.  I remember a fan base and a team rallying together to support each other and a pain-stricken family to go on an improbable playoff run.  I will never see the #21 or hear the name Taylor without thinking of Sean Taylor and the impact he has had on my life.
Check out this awesome highlight reel of our guy Sean T.
Check out Sean Taylor's Foundation: http://seantaylorfoundation.org/
Also check out: http://voices.washingtonpost.com/redskinsinsider/fund-for-seans-daughter-jackie.html 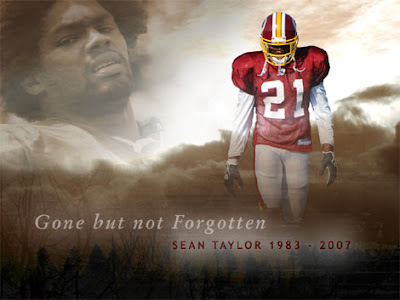 Posted by Battle of the Beltway at 2:31 PM