Arming Up Part 1: The Starting Rotation

When pitchers and catchers reported last year the Orioles’ rotation had more mediocre options than McDonald’s array of chicken sandwiches.  But the starting rotation used public perception as motivation and became a steadying force for last year’s team.  This season the rotation is much more clear and expectations are understandably high.

When the Orioles acquired Jason Hammel last year, it made as much noise as a conversation at a Bruce Springsteen concert.  No one expected him to make the rotation, let alone emerge as our staff ace.  Despite linger knee injuries, Hammel thrived away from Coors Field.  In the thicker and more humid East Coast air, Hammel’s two seamer was able to run in on right hand hitters and away from lefties.  Hammel put the rotation on his back, when healthy, and kept opposing hitters to a .234 average and amassed a 3.43 ERA. His 113 strikeouts in 118 innings pitched was not too shabby either.  With his knee issues apparently resolved a healthy season out of Hammel Time will be essential for another October run. 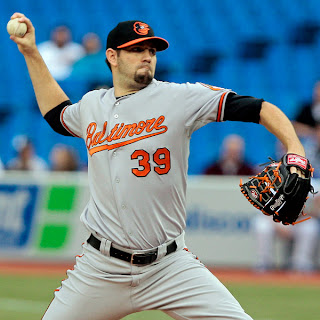 Remember when the O’s lost game 1 at home, and we realized Game 2 was on the left shoulder of We-Yin Chen?  Remember that “well this was a fun run, but now it’s over” feeling Birdland felt?  Then do you remember when Sweet Chen Music shoved it up right up the Bronx Bombers’ asses and made us all believe in Orioles Magic one more time? It was a peaks and valleys kind of rookie season for Chenner, who came out like gangbusters throwing quality starts in his first 7 professional starts, to a tune of a 4-1 record.  The rest of his rookie campaign was all over the place, a win here, a loss there, a lock down performance vs. Tampa quickly followed by a punishing beatdown by the Royals.  Chen finished the regular season at 12-11 with a 4.02 ERA (let’s trim that down, please) and a WHIP of 1.26.  What’s truly great about Chen is his impeccable control, he can command all of his pitches (57 BB’s in 192.2 innings).  While a sophomore slump is a legitimate possibility, Chen looks to build off a solid rookie season and shoulder more of a load as he gets more acclimated to the American style of rest and recovery. (Don’t get me started on pitching maintenance of the Orient…).  We should expect the league to catch up to Chen, but if he can make adjustments once the league adjusts to him, then we will really know what we’ve got in Wei-Yin Chen. 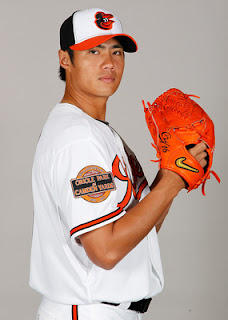 On a team full of great stories, was there any more unbelievable and simply awesome than Miguel Gonzalez?  Working his way back from Tommy John surgery in the Mexican Leagues, he was spotted by an Orioles bird-dog scout.  I absolutely loved watching Miggy’s starts because of his cool and calm demeanor on the mound.  After already enduring the dark uncertainty of being a free agent pitcher labeled with arm problems, nothing seemed to bother Miggy. The dude was unflappable last year, and you can certainly expect that to continue.  In his 18 starts, Gonzalez (who was called up as a reliever) baffled hitters with his sneaky fastball and tumbling splitter.  Gonzalez was 9-4 a year ago with a 3.25 ERA, and his clean mechanics make me believe that his arm injuries are behind him.  Miggy diced up the Yankees in Game 3 over 7 innings, only too see the win slip through the team’s grasp thanks to that bald alien looking jerk-off who pinch hit for that overpaid primadonna. Miggy is still a relative unknown nationally, but if his poise is any indication, America will be well aware of our guy this summer. 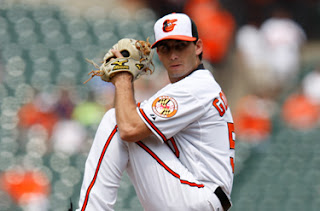 I’m going to toot my own horn for a minute here.  When everyone was bailing on Tillman, calling him a bust, and collectively calling for his head, I stood by my man.  Tillman’s biggest detriment was his control, and it was pretty obvious that he was just a youngster trying to do too much out there and it snowballed on him. First his control went, then he lost his confidence.  Too make matters worse, Tilly over-pitched himself in 2011 and his velocity dipped.  I remember hearing last year during Spring Training, that not only had Tillman’s velocity gotten back to where it once was (94-95), but it had jumped to 96-97 at times.  I began salivating thinking of him pairing that power fastball with his knee-buckling curveball.  All we needed was Tilly to get his pitches under control and the 23 year old could prove that he belonged.  And damnit did he ever! Now 24 and full of confidence and swagger, Tillman appears ready to lock down a rotation spot and build off last year’s impressive 9-3 record…and a ho hum 2.93 ERA.  It appears Tillman has found himself as a professional pitcher, and his potential for this season and seasons to come is as sky high as Lindsey Lohan’s legal bills. 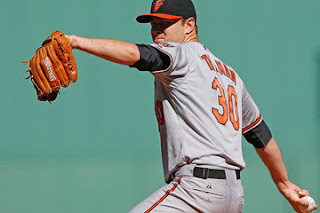 Here is where it gets interesting.  There are more questions here than Oscar Pistorius’s side of the story.

If this were a promo for The BUCKchelor Chris Harrison would emerge from the dugout behind a cloud of dry ice and announce, “Seven pitchers. One Spot in the Rotation.”

He signed a minor-league deal last week, and will need to earn his spot on the 40-man roster, let alone the rotation.  When Jurrjens injured his knee his mechanics faltered because he was compensating for the pain he felt and the overall weakness in his knee.  With his knee seemingly healthy, it will be extremely important for him to iron out his mechanical flaws during the Spring and get back to his 2011 form when he went 13-6 with an ERA of 2.96 for the Braves.  Personally I believe in Jair, I’ve seen what he can do when healthy, and I fully expect him to be our 5th starter.

Zach Britton has shown flashes of dominance, while at times he’s looked more lost than John Goodman at Whole Foods.  The sky is still the limit for Britton and I would love to see him break camp with the Big League team, and he may well in fact bounce in and out of the rotation.  Unfortunately, I think Britton will need an injury from someone in the rotation in order get his shot. Once he gets that opportunity, I hope he never looks back.

I had high hopes for Jake Arrieta, but 3 seasons and 58 starts later, I just don’t see it working for Jake as a starter.  His change-up has not developed enough for it to be an effective pitch, and his lack of command gets him into more jams than he can wiggle out of.  His pitch counts in turn elevate and getting him through 5-6 innings is more of struggle than watching a guy with a bad prostate take a piss.  Much like Matusz and Hunter, I think Arrieta belongs in the pen where he can come in for an inning or two, throw absolute cheddar and get some quick outs for the ball club.

Dylan Bundy will be the ace of the Baltimore Orioles, this is no secret.  Pitchers with his pedigree and repertoire come around as often as Haley’s Comet.

HOWEVA, he needs some seasoning, and will be better served dicing up some minor leaguers in order to learn how to be more of a pitcher and less of a thrower.  Rick Peterson knows exactly what needs to be done with Dylan Bundy, and another couple of months under Rick’s watchful eye would be the best-case scenario for Young Bundy. Therefore Bundy probably won’t break camp with the Birds, but a mid-summer call up is as certain as the deliciousness of a Twix bar.

What our rotation lacks in big names, it more than makes up for with stuff, moxie, grit, and overall ability.  For once in a long time, I am very excited about the possibilities and the depth of the Starting Rotation.

Click here for Part 2: The Bullpen
Posted by Battle of the Beltway at 8:52 PM