The BUCKchelor: The Search for a Rotation

Pitchers and Catchers have reported (which is a daily occurrence at the "Man Hole" in Key West), intrasquad games are in full throttle, and our first series of arm and back injuries are filtering out of The Orioles Complex in Sarasota.
The Orioles pitching rotation has more candidates than a season of The Bachelor. The rotation battle is a mix of prospects looking to live up to their potential, former prospects looking to bounce back and re-assert themselves in the club’s future, Asian pitchers hoping to finally prove that their craft can actually work over in the States, and finally “veterans” looking to earn a stable role. Of these 9-10 pitchers, only 5 will earn a spot in the rotation (for now), and Orioles Skipper Buck Showalter is the man who will decide their fate. Think of pitching coach Rick Adair as Buck’s Chris Harrison, stirring the pot while providing guidance, and asking the same 3 questions over and over.  So let’s meet the men vying for Buck’s affection and the 5 Orange Roses.

TIMEOUT!
Am I really comparing the Orioles pitching rotation battle to The Bachelor? I answer that question with another question…does Ben Flajnik desperately need a new haircut?
Many of us watch The Bachelor whether our wives or girlfriends make us watch it or we just simply watch it on our own accord. It’s ok to admit it fellas.  We are fully in the Trust Tree and unlike that hack psychiatrist from Old School, your secrets are safe here.
Before we get into the O’s rotation I’ve just got one idea for the next season of The Bachelor. I think it is time for ABC to break away from having the nice guy as their Bachelor, it’s too predictable and only drama ensues only when the chicks get catty.  I’m tired of this emotionally sensitive guy who “just wants to connect.” I think it’s time to put a guy on there with a Tiger Woods-esque “sex addiction”.  Can you imagine the carnage and wreckage that he would leave in his wake after putting it to all those women? It would make Katrina look like a light rain storm.  None of these “engagements” ever last, so we can all stop pretending that’s what this show is about.  Who’s with me?
But enough about that.  In the words of Chris Harrison, let’s meet our candidates!
Dana Eveland was acquired from the Los Angeles Dodgers at the winter meetings. He’s a bad-bodied lefty journeyman and the Dodgers felt he had a better chance at making the Orioles starting rotation than making their Triple-A rotation. Enough said.  If Dana Eveland makes the Orioles rotation I will write a post about why Jeffrey Maier is an American Hero and does not deserve to be kicked in the nuts by EVERY Orioles fan.
Tsuyoshi Wada is being lauded as The Duke’s biggest off-season acquisition.  Writing that sentence sucked, but not as much as reading it over again.  Now don’t get me wrong, I actually think Wada is going to be a really nice piece for the Orioles, but the fact that a 31 year old soft tossing lefty from Japan that was not sought after by many big league clubs is being tabbed as the team’s biggest off-season move is a bit unsettling. But that is neither here nor there.

Wada has great control and plus breaking stuff.  Like many of his Japanese brethren his fastball is not going to light up many radar guns, but it has nasty movement.  He hides the ball well and is a relative unknown to Big League hitters, which makes him better suited to come out of the bullpen.  Wada received an injection into his left elbow a few days ago and has been shut down by the team.  This apparently is normal for him, and he is expected back in a week or so.  Either way, my gut says the bullpen is going to be where Wada finds his role.
Wei-Yin Chen, remember this name Orioles fans. Easy for me to say, it took me six tries to spell his name right.  There are more combinations you can make with his name than a Chinese food menu. Chen was the other notable international signing made by The Duke.  I really think Chen is going to be a rotational mainstay for the O’s for the next few years. The 26 year old left hander from Taiwan has a fastball that sits in the low 90’s, but can reach 94-95.  When he hits the mids 90’s we will call that the “Chennar Cheese”, OK? Good, glad that is settled. 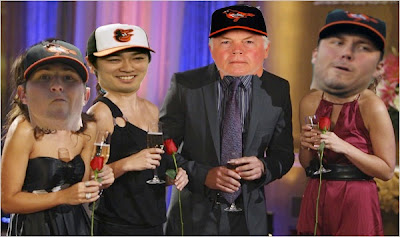 Let's hope we see the young arms take another step forward and solidify themselves as big league pitchers.  Heck, I'll settle with 2 of the 4 young guys emerging.  Chen's mystery will be something to watch this spring as well.  All in all this rotation will be a work in progress and we are likely to see many of these guys get their opportunities to start.  Hope springs eternal right???
Posted by Battle of the Beltway at 7:22 PM