An Ode to Jay Bilas

The Final Four is a few days away and college basketball fans are buzzing.  We will get to the match ups and the hysteria surrounding one of the greatest sporting events later in this week, but for now we must pay homage to an unsung hero of March Madness.  Games are televised Thursday through Sunday for three weeks and everyone tunes in, but following the games come the expert analysis and breakdown.  No one…I repeat NO ONE is better or more honest with their analysis than Jay Bilas.  He contributes his excellence to ESPN mostly, but can be relied on to call a game with expert fashion for CBS as well. 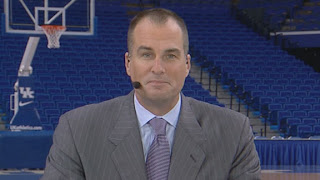 You may be asking yourself why I am lauding Jay Bilas and the answer is very simple; he is a stone cold red-blooded American.  He is the most truthful and honest analyst on T.V.  You can always rely on Bilas to shoot straight from the hip and give you his honest opinion.  In the sports analyst game there are a few kinds of talking heads.  There are irreverent ones who will say anything to garner a reaction even if it is outlandish and unfounded.  A few examples are Doug Fraudlieb and Skip “Please Sayless” Bayless.  These two will argue some of the most ridiculous points in a shameful attempt to further their reputations and stir the pot.  The other kind of “experts” are those who are afraid to say anything controversial and just pander to a certain fan base…I’m looking at you Buster Olney.  Then there is the Jay Bilas type of analyst, much like Highlander…there can only be one!  Bilas does not attempt to create controversy; he just speaks his mind and does not hold back.  His intentions are different from Skip Sayless and Doug Fraudlieb.  They choose to argue points that they know will create controversy and only help get their names mentioned by other;  whereas Bilas just presents the facts and aims to provide expert level insight..  Bilas is a professional, and his workmanlike approach to analysis should be recognized.  He is really at his best on Selection Sunday during ESPN’s Bracketology.  When many analysts use this as a time to affirm themselves atop their soapboxes and rant and rave about the small teams not getting any love, Jay calmly points out how it is, and does his best to steer these other analysts in the proper direction.  He does not hop on bandwagons, he just delivers his opinions and then sticks to them even when the waters grow rough.
Are any of you following Jay on Twitter? If your answer was no then shame on you!  He is one of the more entertaining Tweetsters on the globe.  He delivers expert analysis and even peppers his tweets with quips and funny anecdotes.  Many of these come at the expense of his elder cohorts such as Bob Knight, Bill Raftery, and Digger Phelps.  But Bilas does not have to worry about receiving any backlash from the General, Captain Highlighter, or “Onions” Raftery  because they think “twitter” is what their grandmother’s warned them not to do because it will make them go blind.
Some of Mr. Bilas’s gems have been:
“Digger just received a message by pony express that I have been tweeting about him. Objects are flying in the war room.”
“Just caught a glimpse of Craig Sager's jacket interviewing Rick Barnes. Threw up in my mouth at the sight of it. Tie making me dizzy.”
For further clarification on why Bilas was getting dizzy… 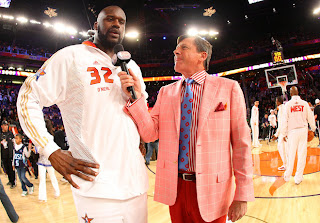 “Digger said Jimmer Fredette is "on a mission." If he's on a mission, you can't pick BYU for two years. They should tell us that in advance.”
How’s this for expert analysis:
"Against UNC, when Kentucky made four or more passes, the Cats were 14 for 23 FG, including 8 for 8 3pt.”
When Bilas isn’t providing his expertise on the round orange ball, he is an attorney at law with the firm of Moore and Van Allen, PLLC in Charlotte, NC.  Is it wrong that I am thinking about driving down to Charlotte just to commit a misdemeanor only to have Bilas represent me?  I mean come on, if he is as good a lawyer as he is a basketball analysis then the trip plus the public urination citation would be well worth it.
Just a few things about Jay Bilas you should know:
1) When Jay Bilas speaks, GOD listens.
2) Erin Andrews has a crush on Jay Bilas…but he’s out of her league.
3) Digger Phelps and Bob Knight have forgotten more about college basketball then we could ever learn.  They’ve also forgotten their ATM pin numbers, daughters’ birthdays, and where they left their keys.  Jay Bilas has the answers to all of these.
So this weekend after you’ve watched a couple more classic college hoops games, quickly tune over to ESPN and listen to this man and I promise that you will learn more about the games you just watched in two minutes of his analysis than you learned from watching the whole game.
Do yourselves a favor and follow this man on Twitter for tremendous basketball insight and the occasional laugh. @JayBilas
And while you’re at it check out the newest members of Twitter: @Beltway_Battle
Posted by Battle of the Beltway at 3:13 PM