"There is not an ignorant bone in my body. I just encourage you to think."

Could someone please ask Rashard Mendenhall what a size 12 Nike tastes like? Because this man has officially put his foot in his mouth.
Could someone please get Rashard Mendenhall a red squeaky ball to put on his nose and a miniature tricycle to ride around on? Because this man is acting like a clown.
Not sure what I am referring to? That’s fine, it really should not be news worthy because of the irrelevance of Rashard Mendenhall, but he recently made some insensitive comments and we here at the Battle of the Beltway deem it necessary to alert the masses.
Could someone please get Rashard Mendenall a diaper? Because we are about to rip him a new one.
As we all know, Osama Bin Laden was recently brought to justice by a team of brave and heroic U.S. Navy Seals.  Much to Bin Laden’s chagrin, there were not any virgins awaiting him in his final resting place.  There was much rejoicing from sea to shining sea from outside the White House, the Naval Academy, and Times Square.  There was an outpouring of support and pride because the mastermind behind the single most violent and vicious attack on American soil received his comeuppance in the form of a stealthy, tactical, and accurate team of badasses with one mission…shoot to kill.

So why does this historic day in American history, nay world history, have anything to do with an overrated running back?  Here’s what:
Directly from the Twitter account of R_Mendenhall:
May 2, 2011 5:29PM: "What kind of person celebrates death? It's amazing how people can HATE a man they have never even heard speak. We've only heard one side..."

Actually Rashard we have heard this man speak…a lot.  During his life, Bin Laden was notorious for releasing videos of himself giving anti-American speeches.  These were speeches that promoted violence towards America, her citizens, and her citizens who lived abroad.  He sought out the death and murder of millions of innocent Americans.  I’d provide links to many of these speeches, but I think it is best to not post those on this website and have FBI agents knocking down our doors and shutting down the Battle of the Beltway.
Osama Bin Laden formed al-Qaeda. Are you aware of what that is Rashard? I’m going to assume based on the ignorance of your tweets that you don’t know what al-Qaeda is; so allow me to enlighten you. Al-Qaeda is a militant group who is responsible for many terrorist attacks abroad and on our soil, most notably 9/11.  They are a radical sect from the Muslim religion, and by no means represent the majority of Muslims.  They are suicide bombers, mass murderers, and basically the most evil kind of human. So this man that you are defending (intentionally or not) is responsible for establishing, aiding, and funding this organization.  He led this organization, he plotted attacks, and he is one of the most vicious terrorists ever.  We’ve heard Bin Laden’s “side” one too many times and it all begins and ends with the ideas that Americans are infidels, impure, and disgusting people who deserve to die.

To be honest yes, we Americans who were rejoicing late Sunday night and into Monday morning, were celebrating another human being’s death.  I’ll admit that, as I’m sure many others will too.  This sounds morbid, I get that, but it represented way more than just a single man’s death.  It was bringing justice to the man who was the most responsible for the deaths of 2,977 innocent Americans on September 11, 2001. It showed terrorists everywhere that no matter you wealth, your status, or power, we will hunt you down and we will bring you to justice. This represented closure for many Americans, especially the families of victims from 9/11.  This was a signifying moment with far more magnitude than any one of Mendenhall’s fumbles in the most recent Super Bowl. 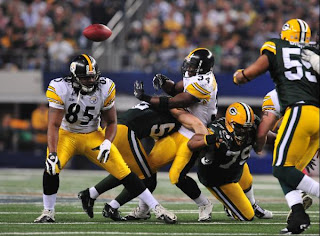 It unified our country for a minute amongst escalating gas prices, a down-trodden economy, and a political divide in Washington.  Our country has spent ten years searching for Osama Bin Laden and his reign of terror has finally ended.  To Mendenhall this may have been the death of just one man, but it represented a probable splinter of the most powerful and violent terrorist cell the world has ever seen.  It will not stop al-Qaeda completely, but this was a significant blow to their vitriolic ways.  This was far more than the death of one man, but a significant step for America in the never-ending healing process from 9/11.  There were holes in the sky that day, and there are still holes in all of our hearts who witnessed it.  That hole will never be filled, but this was a significant moment for all of us who were transfixed to television sets almost ten years ago.

Osama Bin Laden stood up against many of the rights we Americans take for granted.

He was against free speech. Free speech is a great thing in our country that we all take for granted because we use it every second.  While Mendenhall was tweeting, he was utilizing his right to free speech. Something the man he was de facto defending was entirely against.

Osama Bin Laden was against the freedom of religion.  His violence was directed at Jews, “Crusaders” (Christians), and Muslims who did not believe in his violent jihadist form of radicalism. He believed in religious oppression.

Osama Bin Laden did not believe in the equality of women.  He owned many wives, fathered many children, and openly referred to women as an inferior race.  He even went as far as using a woman as a human shield in his final minutes.

Osama Bin Laden was against our way of life as Americans.  Our proud and rich history was fodder for his violent and hate-filled spewing.  His life’s mission was to inflict pain, fear, violence, and above all death upon the citizens of The United States of America.

Rashard Mendenhall later tweeted: “There is not an ignorant bone in my body. I just encourage you to think."  Well Rashard, I encourage you to think. Think about the families of the 2,977 victims from 9/11.  Think about the troops sacrificing everything to protect your way of life.  Think of the families who have lost loved ones who died protecting our country. These sons, daughters, brothers, sisters, husbands, wives, mothers, and fathers died protecting your right to tweet and say whatever you feel.  You have every right to say what you said because that is what America is all about.  I just implore you to understand the insensitivity of your tweets and the many of your fellow Americans that you offended.

God Bless our Troops! And God Bless America!
Posted by Battle of the Beltway at 3:30 PM