Back to the Future

Well folks, he’s done it again. Ted Leonsis aka “Teddy Owner’s Box” aka T.O.B.  has once again found a way to turn a negative into a positive.  He has outclassed Dan Snyder yet again, and shown that he is the top owner in the DMV.  Fans have been clamoring for a change and he listened; I’m not talking about firing a coach after one season (Schottenheimer), signing the biggest name free agent regardless of his character issues (Albert Haynesworth), or raising ticket prices, food prices, or charging to park at the practice facility.  Let’s be real folks Dan Snyder listens to our passionate fan base about as much as Helen Keller listened to music. Did I cross the line there? Yes. Was it necessary? You betcha.  It is so refreshing to have an owner who appreciates the heartbeat of the city.  And T.O.B has signed off on a very significant change, a change I call the “Back to the Future” decision. Without further ado I give to you the new look Washington Bullets, er I mean Wizards… 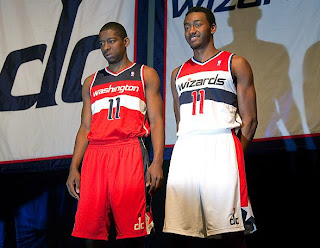 Yes that’s right folks!  The Wiz have changed their team colors and uniforms to red, white and blue, which unifies them with the Nationals and the Capitals.  The Skins will always be the burgundy and gold and SHALL never change (Crap! Snyder will probably change that now too) so they get a pass here.  But I love the fact that our major sports teams all rock our Nation’s colors.  Not only is D.C. the most powerful city in the world, but it’s also our Nation’s capital.  How many of you knew that? All of you I hope.  But I digress; the uniforms are modernized versions of these relics.  I personally love it because I think this is one of the beginning steps in changing the culture surrounding this franchise.  Mr. Pollin was a terrific owner, he re-gentrified China Town by inserting the Phone Booth, and his charitable efforts were that of legends.  But with that said there certainly is a new sheriff in town. Sheriff T.O.B.will look to carry on this legacy and this uniform change is a very significant step in the right direction.
The uniform change pays homage to the greats before from championships won long ago; Wes Unseld, Gus Johnson (no not this one), Earl Monroe, and legends from the 1990’s Gheorge Muresan, Brent Price, and Calbert Cheaney. Ok, so the names kind of tail off in the 90’s but who had a smoother stroke than Brent Price? Well maybe Tim Legler or Tracy Murray.
The uniform change washes our hands of the failures that were numerous during the blue and gold era.  Most notably Kwame Brown, Gilbert “The Quick and Dead” Arenas, and these traveshamockeries. Don’t you dare say Michael Jordan was a failure. I am a clear cut example of a kid who grew up in the 90’s who firmly believes his Airness could do no wrong. The bookies tricked M.J. into gambling tens of thousands of dollars, his wife drove him to cheating, and Kwame Brown is a Russian spy sent to sabotage our Nation’s Capitol’s professional basketball team.  Any other questions on Michael Jeffrey Jordan? Didn’t think so. With the return to America’s colors the Wizards can turn the page on a decade (or 2-3 decades) of debacles and start to build towards a new era led by John Wall, Jordan Crawford and hopefully someone in this year’s draft. Cross your fingers this era does not include the bad-body sloth with no heart known as Andray Blatche.

The Redskins are the main attraction in town, there is no doubting that, but at the true heart of this metropolis is basketball.  The DMV bleeds for good hoops whether it’s Georgetown or the Wiz.  The area is home to some old school basketball lifers who have been turned off by the NBA due to watered down talent, the influx of thugs, ever increasing ticket prices, and overall just poor play.  When the Bullets became the team formerly known as the Bullets the fan base got thinner than Christian Bale on the Medifast diet. We need these savvy veteran fans back in the Phone Booth and the new unis have the pull to do so.  In the red, white, and blues, Trevor Booker will look like Wes Unseld unloading an outlet pass to John Wall and Jordan Crawford will make it rain like Tim Legler in the days of old.
I can just hear the naysayers now. They’re saying that this just seems like an attempt just to drum up ticket and jersey sale, and get some good publicity. And to that I say, so what!? This team could use some positive pub after the past few seasons of ineptitude.  We have a new fresh face of the franchise and now a new look that reminds us of better times.  T.O.B. deserves a tip of the cap; he is showing us that he has the fan base’s best interest in mind and not his own. Yes he will stand to make more money from this move, but we know T.O.B. puts that money to good use with the improvements at the Phone Booth as evidence.
The Uniforms are a step “back to the future” and how let’s hope we can do something about that team name as well!

And as always, follow us on Twitter @Beltway_Battle for up to the second hometown bias.﻿
Posted by Battle of the Beltway at 10:28 AM