The Maryland Terrapins are headed to the Big 10 and the pissing and moaning coming out of the DMV is louder than a baby on a cross-country flight. As a self proclaimed and unapologetic hater of all things Terrapin, my hair trigger reaction is to tell Terp Nation to shut the heck up. But after further review of the Conference Move, my reaction is….SHUT THE HECK UP TERP NATION.

This is a good move. Wait, no. This is a really good move! Wait, still not there yet.  This is a GREAT move! There we go.

The biggest obstacle for many of you is this feeling of nostalgia for the old ACC, and I completely get that. But the ACC really hasn’t been the ACC since Miami and Virginia Tech joined up. And with the upcoming additions of Pitt, Syracuse, and Notre Dame, the ACC is about to be as recognizable as Joan Rivers before her 3,764 plastic surgeries. The ACC is changing, expanding it’s market, and quite frankly these moves were not going to be good for the University of Maryland. But we will dig into that sport by sport later on.

The move to the Big 10 is a money grab, plain and simple. This has become commonplace in collegiate athletics, and there is absolutely nothing wrong with this.  In case you have been sleeping under Ralph Friedgin’s gut for the past few months, you know that Maryland’s athletic department has been hemorrhaging money.  To the point where they had to slash seven programs including the swim team, men’s tennis, and a whole bunch of men’s track teams (that’s right, the runners are multiplying!).  With the move to the Big 10, Maryland will take in a projected $30 million annually (TV Revenue, Ticket Sales, etc.) which will go a long way for a school whose athletic programs need cash flow more than Antoine Walker.  This deal from the Big 10 is like someone with years of student loans and credit card debts opening their front door and seeing Ed McMahon with a large cardboard check.


Maryland will hopefully know what to do with this newfound cheddar, and they will need to funnel it into recruiting. Period.  Byrd Stadium is already a great venue and the football facilities are state of the art.  The Comcast Center is a far cry from the vibe of Cole Field House, but it is certainly enough to entice recruits.

Testudo is on the balcony ready to jump off and I’m the police officer with the megaphone who is trying to talk him off the ledge.  My wife has left me and she took the kids all because I have a bad drinking habit, which stems directly from the fact that I let a 16-year-old girl jump off her apartment balcony 6 months ago.  This is a tough thing to get over, and it’s cost me everything, but maybe just maybe, if I can prevent Testudo from jumping I will redeem myself. Well here it goes 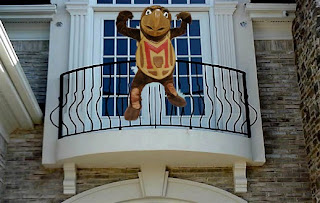 This is the sport that stands to benefit the most.  Football is most schools’ major moneymaker.  Maryland’s football tradition in the ACC is about as storied as any of these contestants on Dancing With the Stars.  This whole “Oregon East” movement backed by Under Armour can work, and the Big 10 will provide a wider net for this.  Whether you are a Randy Edsall supporter or a Randy Edsall Hater, this conference move is a good thing.

Haters: Maryland does not have the money to fire Edsall.  If they fired him with this many years left on his contract, the school would be on the hook to continue to pay him the remainder of his contract.  They cannot afford to pay him and another coach at the same time. This move can give them the financial support to fire Edsall and bring in a viable replacement and pay him an appropriate salary.

Supporters: For those of you who still believe in Edsall, the move to the Big 10 is still a good thing. Football is better in the Big 10 than it is in the ACC.  With that Randy Edsall can start to recruit a different caliber of athlete than he could in the ACC.  Players who get spurned by Ohio State or Michigan will want a crack at those schools and Maryland can provide that opportunity.  The move provides Maryland with a more legitimate opportunity to open the recruiting trails in the Big 10 states like Pennsylvania and Ohio.

Ohio State, Penn State, and Michigan will be a sellout every single year they play at Maryland.  They have large fan bases that will buy up tickets, which in turn will also bring Maryland’s fan base out for the big games.  Playing big time programs like this will also help recruiting. As a high school football player, you want the opportunity to play the Ohio States, the Michigans, and the Wisconsins.  More national television games and more national exposure mean better recruiting pitches.  Getting a chance to play at the Big House, the Horseshoe, Happy Valley, or Camp Randall will help recruit a better caliber of athlete than going to play Virginia Tech, Clemson, or Florida State (which is a great venue, but wouldn’t you take the opportunity to play at 3-4 great venues per year, not just one?).

With more money coming in, there will be bigger recruiting budgets and the Maryland staff can go on more visits, and get out and watch the players play more.  It may take a couple of years for Maryland to get up to where they want to be, and it may take a different coach, but as far as football goes THIS IS THE RIGHT MOVE.

Here is where people are most upset.  Reasons being, the nostalgia over their “rivalries” with Duke and Carolina, the reputation of the ACC, and their regionally geographic bound with the Atlantic Coast. Lets debunk all of these right now.  In order for it to be a rivalry, both sides must consider it so and the hate and passion must be so high on both sides that this game is the biggest of the year, regardless of the two teams’ records.  With that said, there’s really only one true rivalry in the ACC and that’s Duke and Carolina.  Maryland fans hate Duke and they hate Carolina – as evidenced by these being the only two games the student section is actually full.  Duke and Carolina enjoy beating the ever-living piss out of the Terps, but no more so than Wake Forest or Florida State.  This is not a rivalry just angry little brother syndrome.  So move on Terps fans and forge new rivalries in the Big 10.

The second part of this is the reputation of the ACC.  For a few years, the ACC had ascended to the tops of College Basketball where 7-8 teams were making the big dance.  However, it has become a very top-heavy conference with tiers. Your Top Tier is Duke and Carolina and now you HAVE to include N.C. State.  The 2nd tier is the next batch of schools that are competitive, jump in and out of the top 25, and make a run every few years, only to shy up once the lights come on. This is Florida State and it used to be Wake Forest.  Maryland would sniff this tier, but in reality they were in the 3rd tier with everyone else.  The Terps were lost in the shuffle most years, and not even a GPS could help them find a way in the new ACC, which will include Syracuse, Pitt, and Notre Dame (which is a better job and program, cut to Mike Brey nodding).

Finally, the regional attachment to the ACC.  I get this argument somewhat because the charter members of the conference come from the Maryland, Virginia, and Carolina region so there is a certain bond.  But once the ACC welcomed in schools from Florida and Massachusetts, that bond essentially disintegrated.  And now with schools from Pennsylvania, upstate New York, and even Indiana coming aboard, this regional attachment is nothing more than an old man refusing to give up his recliner despite the fact the original covering is withered away to nothing.

In recent years the Big 10 has surpassed the ACC as a basketball conference.  The Big 10 has won the past 3 ACC-Big Ten Challenges, since 2009 the Big 10 has made 3 Final Fours while the ACC has made 2, and currently the Big 10 has the no. 1 ranked program (Indiana), the no. 3 (Ohio State), the no. 4 (Michigan), no. 15 (Michigan State) the no. 24 (Wisconsin), and Minnesota who is somewhere between 26-28.  Besides the Tobacco Roadsters (Duke no.5, UNC no. 9, and NC State no. 16) there is not much going on in the ACC. Florida State will be there, but as a whole the Big 10 is far more competitive.  It is the better basketball conference and with the recruiting classes that Turgeon is bringing in, I could definitely see Maryland getting more at-large bids out of the Big 10 than they would in the ACC.

As far as baseball goes, Maryland was never EVER going to compete in the ACC.  They won 5 games a year in conference, and eeked their way to a .500 record overall year in and year out.  While the Big 10 is a major step down from the ACC in baseball, it gives Maryland a chance to be who they really are.  They were never going to be a good ACC team and trying to fool themselves every year was counter active.  Now they can compete on a more even playing field.  Not bad for a program that barely survived the program slash from this summer.

As for those of you who are complaining about how it affects lacrosse.  Put on your croakies, and your pastel shorts, hop back into your daddy’s beamer, and drive back to whatever hole you crawled out of.  You are a niche sport for rich white kids.  There are only 3 teams in the Big 10 now with Maryland and Rutgers making 5.  Maryland has the option to just become independent much like Johns Hopkins.  Seeing as there are only like 20-30 college lacrosse teams anyways (not accurate number, but I’m not taking the time to look up how few college lacrosse teams there are) Maryland can go independent and still load their schedule with the premier teams they’ve grown accustomed to.  Your sport generates no revenue for Maryland so stop complaining about how it impacts your sport.  Football and Basketball are the CEO’s and CFO’s and Lacrosse works in the mailroom.

Bottom line, this is a good move for Maryland.  The university will make far more money which will lead to improved facilities, more recruiting resources, better academic funding, and they can even reinstate many of the programs that had to be cut over the summer.  Come on Testudo, get down from that ledge it’s not so bad. Forget about cursing out Roy Williams or Mason Plumlee. It’s time to direct those obscenities at Thad Motta’s children and Gary Harris’s mother.
Posted by Battle of the Beltway at 10:57 AM