No, this is not another Congressional Subpoena on steroids (Taxpayers money hard at work!).  Those are four of the players who will see their names on the Major League Baseball Hall of Fame ballot for the first time.  Barry Bonds took steroids (“unknowingly”); Clemens misremembers whether he ever took steroids or not; through an interpreter Sammy Sosa claimed to have never taken steroids, but a 2003 positive test begs to differ; and although he never tested positive, Mike Piazza’s back was rumored to look like this kid’s face.

Another name that will also be on this ballot for the first time is Craig Biggio.  Biggio had a stellar career for the Houston Astros that culminated with his successful quest for 3,000 hits.  Biggio was an underdog his whole career; a grinder whose jersey was always covered in dirt, his helmet was caked in pine tar, and he was hit by pitch a whopping 285 times in his career.  He too cannot escape the cloud of steroids that hovers over this era of baseball whether he took them or whether it is just imply guilt by association.  According to “esteemed” writer Jeff Pearlman, the Astros were “the hotbed for steroids in baseball.” Calling any team a hotbed for steroids is like saying Motley Crue was the hotbed for sex, drugs, and rock and roll.  No team was more of a hotbed than the other because every team had rampant use. 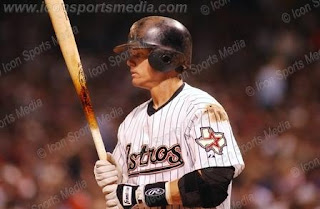 Give me a second here, I need a step stool so I can get up on my soap box…

OK.  All five of these guys should get into the Hall of Fame. Period.  Mark McGwire should have gotten in six years ago, and Rafael Palmeiro should have gotten in three years ago.  Steroids in baseball in the 1990’s and early 2000’s were used as rampantly as crack was used on Bobby Brown and Whitney Houston’s honeymoon. Too soon?

Everybody was doing them, except for Cal Ripken Jr.  of course!  Roger Clemens and Andy Pettitte proved that it was not just the hitters who were on the performance enhancing drugs, but the pitchers were taking them as well.  To me this indicates a somewhat level playing field.  It was not just these hulking sluggers eating fastballs for breakfast and shitting out home runs.  The pitchers were loaded up in order to recover faster, avoid injury, and be able to pitch deeper in games and deeper into seasons.  How is that any different from pitchers in the 1960’s taking “greenies” (amphetamines) in order to throw 120-130 pitches?

While greenies are not HGH or Winstrol-V, they certainly are performance-enhancing drugs.  Yet we pretend not to acknowledge that Hall of Famers like Willie Stargell, Willie Mays, and Mike Schmidt popped those bad boys like Michael Douglas pops Viagra.  You can’t turn a blind eye to these guys and go all revisionist history and exclude players like Barry Bonds or Sammy Sosa from the hallowed halls of Cooperstown.

In 1994, the players went on strike over a dispute with the owners over instituting a salary cap.  There was no World Series, and Montreal will forever wonder about what could have been.  Fans were disgusted, and ticket sales in 1995 were just like Barry White’s voice, LOW.  Cal Ripken Jr. did his part in 1995 to bring fans back to the game, but the fact of the matter is STEROIDS SAVED BASEBALL.

We all remember the Summer of ’98 when Sammy Sosa and Mark McGwire went toe-to-toe and chased Roger Maris’s untouchable 61.  This brought the fans back, stadiums were packed, and Owners’ pockets were bulging more than Jose Canseco’s biceps.  The summer of 1998 brought baseball back for many Americans and the seasons that followed were full of players roided out and hitting home runs at prolific rates.

On September 11, 2001, our lives were altered and our innocence was stripped.  Baseball breathed life back into a country that desperately needed it.  Baseball provided a three hour distraction for all of us every night.  There was that great night in New York when Mike Piazza launched a game winning home run for the Mets in their first game at home since the attacks. I still get goosebumps thinking about it and I’m not even a Mets fan.  Barry Bonds captured our attention as he was swatting homeruns like they were flies fluttering around a cow pie.  America tuned in to watch Bonds hit every night as he steamrolled towards 73 home runs, and we as a country began to step out of the ashes.  Piazza and Bonds were just two players but their feats were memorable and celebrated, and now they are being vilified.

Not only did Owners ignore the elephant in the room, but the media turned a blind eye too.  One writer had the balls to ask McGwire what that bottle of Andro was doing in his locker.  That writer was shunned by other media members who were too busy writing articles that glorified these enlarged sluggers.  Everybody was drinking the Kool-Aid and it tasted so damn good. So this whole revisionist history by the media and a bunch of Dudley-Do-Rights is hypocritical and annoying.  Where were you in 1998? Where were you in 2001? You were probably on the edge of your seat enjoying every long ball that splashed down in McCovey Cove.

Pretty hypocritical of me to attack the media since I’m writing a blog myself huh?  I don’t consider myself the media because I have no credentials and my family members and some creepy guy in Montana are the only people who read this bable anyways.  I, unlike many of these writers played baseball at a high level, and felt the pressures to take steroids.  I know teammates in high school who juiced, and college was no different.  Therefore it may come easier for me to sympathize with those who made the decision to cheat, because while I never made it to the big leagues, I did walk in their shoes when it came to making decisions.
The desire to win at all costs, make the most money possible, and keep up with the next player has led many professional baseball players to the usage of performance-enhancing drugs.  Every baseball player had to make a decision, and a lot of it dealt with keeping up with the joneses.  If you saw the guy in the locker next to you shooting up with Deca, well then you knew you had to do it too because this was your livelihood.  Some did stay above the fray, but those who did not should not be vilified.  I GUARANTEE if there was a magic pill that sportswriters could take and it would make them best writers in the world, they would absolutely take that pill.  And the same goes for any profession.
Barry Bonds is a Hall of Famer. Period.  He was a Hall of Famer before the offseason after the 1998 season when he took his first dose of steroids.  His talent superseded performance-enhancing drugs.  The steroids definitely helped him hit for power at an alarming rate, but he was already well on his way to 500 home runs before introducing his butt to it’s first needle.  Steroids did not develop that God given hand-eye coordination or being able to maintain flawless mechanics while utilizing uncanny bat speed.  While steroids helped Bonds play longer than he probably would have, steroids did not give him more talent.  Just ask Jay Gibbons or Larry Bigbie if steroids make you better at hitting a baseball.
The players who we are going to be seeing on the Hall of Fame ballots had more talent than their counterparts whether they took steroids or not.  The first wave came with Mark McGwire (583 HR’s, 70 in 1998) and Rafael Palmeiro (569 HR’s, 3020 hits) and now the names like Bonds, Sosa, and Clemens will be seen on the ballot for the first time.  Yet a bunch of sportswriters who could NEVER do what these players did on a physical level will be able to finally flex their muscles and stand up to the jocks. And that is exactly what they will do because for once they hold the power.
Where do we draw the line? Does Alex Rodriguez get in? What about guys like Jim Thome and Ken Griffey Jr. who were fan favorites because of their personalities and likeability? If you tell me these guys weren’t roided out then you look more naive than the two Penn State coaches who took the stand to support Jerry Sandusky.
Yes, this era of baseball history was “tainted” by performance-enhancing drug use, but that was the era.   Just like pitchers used to doctor the baseball with everything from sand paper to jalapeno-induced snot. Or just like the 1960’s when Hall of Famers took greenies to give them the extra juice in a day game after a night game or a stretch of 7 games in 6 days.

We just need to acknowledge this portion of the Major League Narrative as an era of performance enhancing drug use.  Steroid use was pervasive and spread wider than Paris Hilton’s legs, and we just have to chalk it up to it being a part of the game and move on.

It is our opinion here at the Battle of the Beltway that Hall of Fame voting should be based partially on numbers but also on generational dominance.  Talent is what led Mike Piazza to being the greatest hitting catcher of all time.  Talent is what made Roger Clemens splitter fall off the table like a rogue meatball.  Talent is what led Sammy Sosa to being one of the most feared National League Hitters in the late 1990’s and into the early 2000’s.  Steroids absolutely helped all of these players play longer than they should have, and helped them recover from fatigue faster, but their sheer talent is what defines their abilities.

The Hall of Fame is a place that’s reserved for the best players of EVERY era, the Steroid Era is a big part of the story, but it is not the whole story. It is our opinion that these guys have to get in.
Posted by Battle of the Beltway at 1:17 PM