The Lesser of Two Evils: New York vs. New England 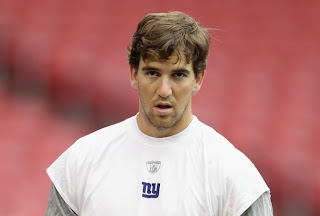 On a more serious note, Eli Manning has really cemented himself as one of the game’s best.  The 2011 season has been one to remember for the younger Manning as he led 4th quarter comebacks seemingly every week, and set a career high with 4,933 yards passing.  He made a comment at the beginning of the year that he considered himself in the same breath as the Tom Brady’s of the league and he was ripped relentlessly for it.  To his credit, he has backed up that talk and another ring would all but confirm the fact that he is one of the best in the business. Eli has earned the respect of so many with his play this season and all of it is over due and deserved.
Another side story involving Eli is that this would be his 2nd ring which would be one more than older brother Peyton.  While Peyton’s career may be going the way of Orlando Bloom’s acting career, Eli’s career is on the ascent.   It could also make Thanksgiving dinner at the Manning compound very awkward:
Archie: OK Eli, you get two pieces of turkey for both of your rings, and Peyton you get only one.
Peyton: Awww DAD! That’s so unfair. Peyton leaves table and storms up to his room.
The final Pro for the Giants winning the Super Bowl –I just threw up in my mouth a little bit– has to do with the Washington Redskins.  In a rather disappointing, discouraging, and overall dismal season, the Washington Redskins defied the odds and beat the New York Giants twice!  Beating the NFC champs twice in one season is great, but saying you swept the Super Bowl champs is a horse of a different color.  It would make this season go from a full on abortion to just an unplanned pregnancy.  When those incredulous New Yorkers are running around our town running their yaps about their latest and greatest team we can always respond with “Yea, well you couldn’t beat the Redskins”, and it will help us D.C. natives sleep at night.
In a perfect world people would just root for the teams that play in the cities they live in.  But we don’t live in a perfect world and live is not fair, just ask Chaz Bono.  Our region is full of transplants and New Yorkers and Bostonians flock to our boroughs like the Buffalo Bills front seven flock to John Beck.  Regardless of who wins on Sunday there will be a much hated fan base rejoicing and thus there will be many of us who will contemplate pouring acid into our ears in order to go deaf.  I hope this list of pro’s and con’s can help give you a few interesting nuggets to root for and root against, but in the end it’s going to be a rough one.
Posted by Battle of the Beltway at 10:11 AM